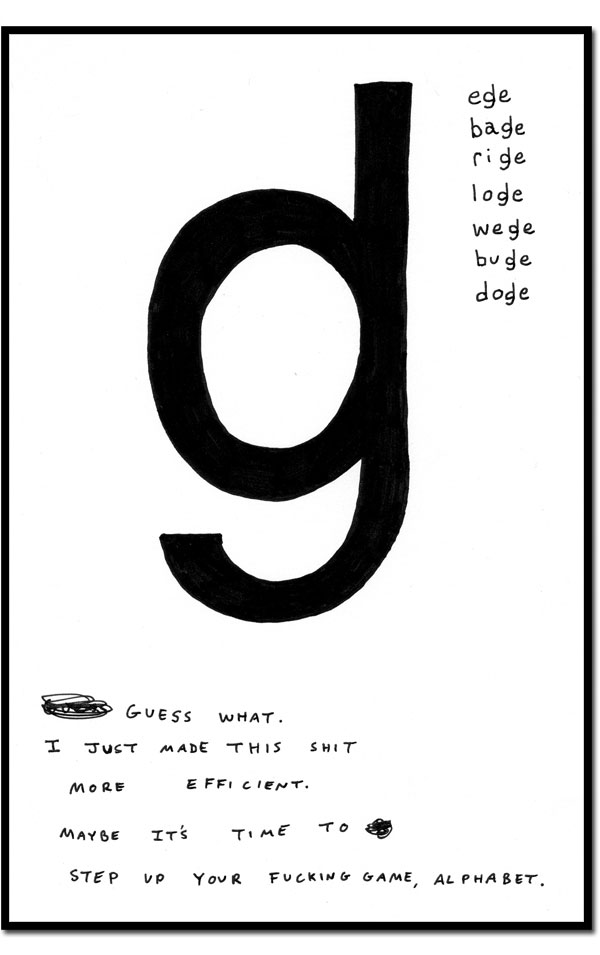 I’m a big fan of people coming up with pointless characters to “Streamline” the English language, I especially like the Interrobang which combines an exclamation mark and a question mark for when you are asking an excited question. 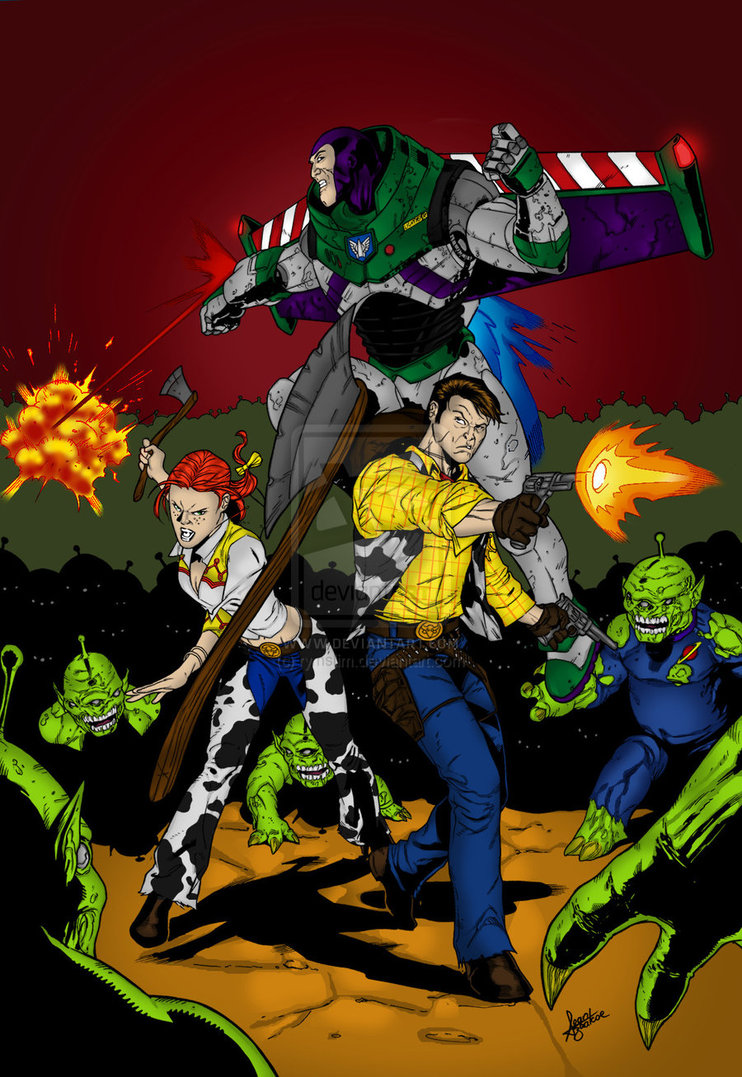 Deviant Art user SEan Izaakse has re-imagined the characters from Toy Story as they would have appeared in an american comic book. I really like this, you should too. 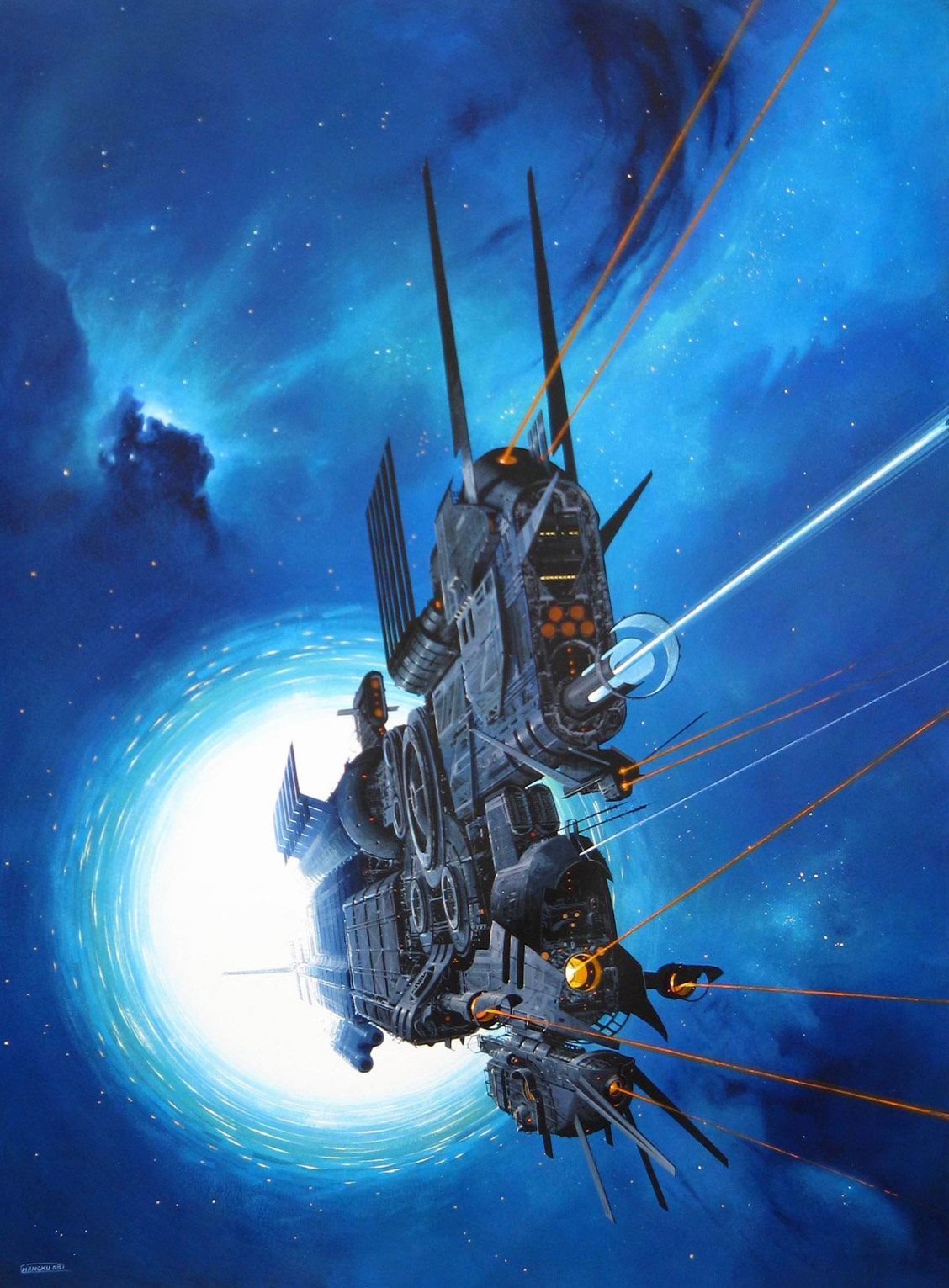 Really quick post, found a pretty cool site which makes me almost wish I was writing a science fiction story for my NaNoWriMo, concept ships has hundreds of just that, concept ships and futuristic vehicles like this helicopter tank thing: 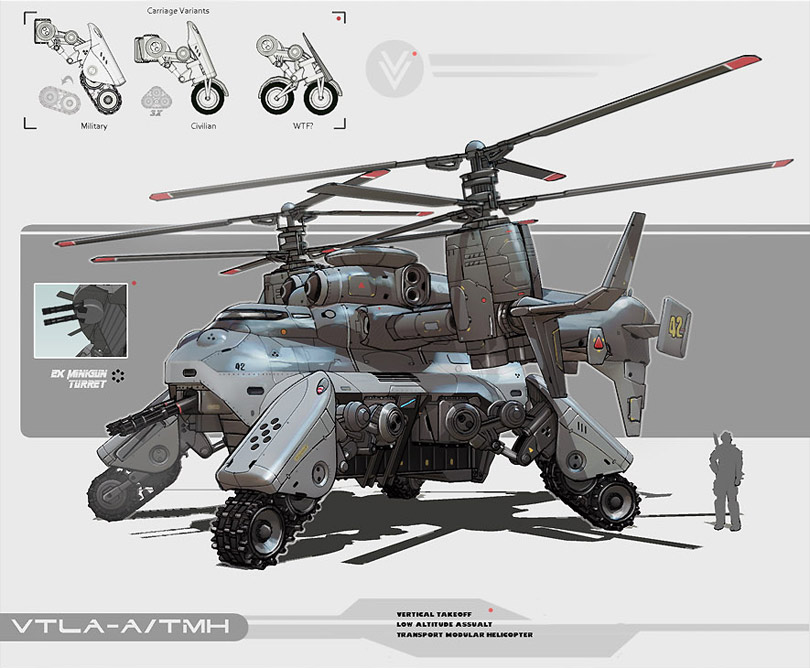 The site is a bit difficult to navigate I think but it’s still got a hell of a let of awesome ships on it, good enough to give anyone at least some inspiration. Some of the images like this one from the Accelerate competition: 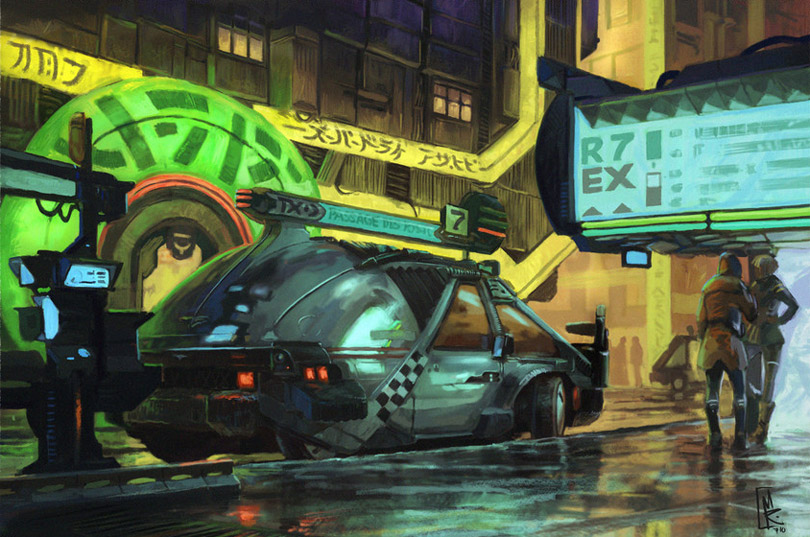 And this one by Dmitry Popov: 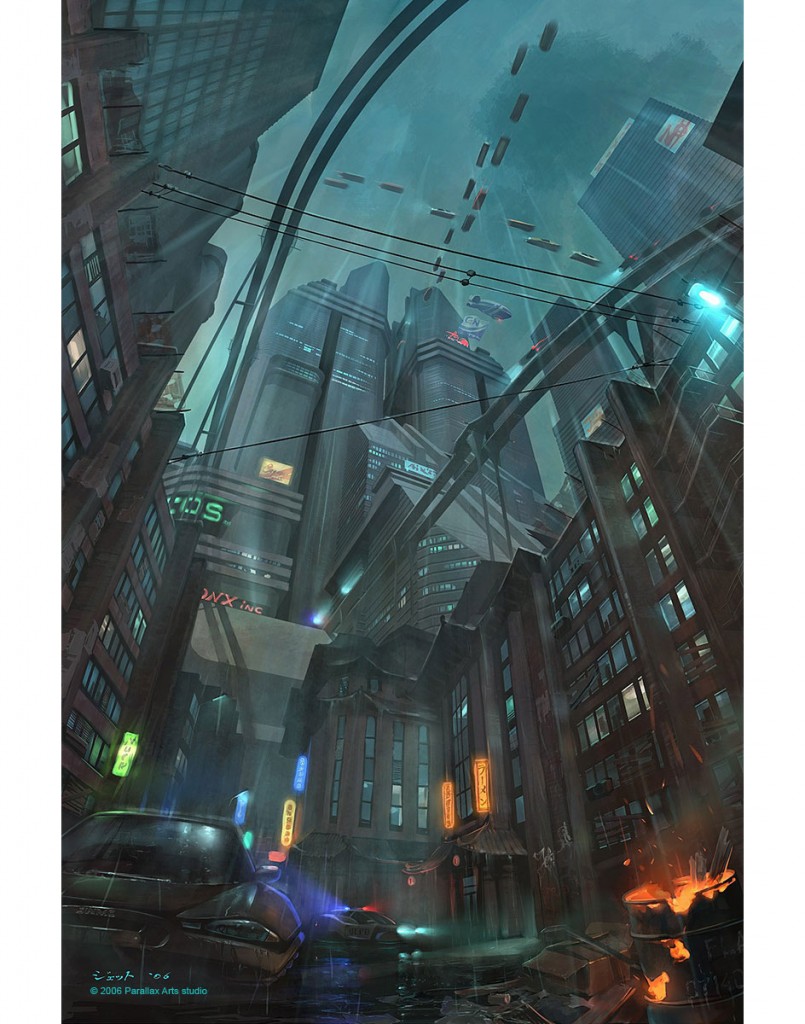 That’s it for me.

I will do this! I’m lacking a bit in the inspiration department at the moment I’m currently sitting at 18,330 when I should be sitting at 20,000 I’m going to try and hammer in a few more words but I doubt I’ll get more than a couple of hundred before I need to go to bed.

Tomorrow is another day and I plan of spending the weekend doing quite a bit of NaNoWriMo.

Of the people I know who are participating in NaNoWriMo I’m currently doing the best which is not normal, I’ve also managed to reach more that double my word count from last year which is an achievement in it’s self I guess. This year I will however win! I am going to do this no matter how hard it is, I am determined, I am also probably doomed to fail…

I’ve jumped the story 10 years into the future, added a character which I’d not initially envisioned being in the story and I’ve written a chapter from their point of view. I think the next chapter after the one I’m writing will also be from their point of view, I’m going to have to come up with some more characters because I keep on killing the ones I have. I’ve also got no idea how I’m going to work one character into the plot, and I’ve not even begun to explore someone who I thought would play a major role but has up till this point only been mentioned in passing. I don’t know how to introduce them at all.

I’m writing utter drivel, which is to be expected, especially for NaNoWriMo where word count is king and coherence is well a little lower than king… Maybe an estranged cousin of the king who they still call a prince, but would never ever inherit the throne…

I’m having serious trouble naming my characters, I’ve tried to come up with names that don’t sound silly, but to be honest they all sound stupid… I may have to rename every single character in the book when I am done.

That is all for now, because I actually need to add words to my NaNoWriMo and I’m sure none of you are actually interested in reading about it. Irene Stone created this pretty awesome Halloween costume in which she dressed up as a TV with a game of Tetris on it and she dressed her dog up as a NES controller. I’m not normally a fan of people dressing up animals because I think it’s a little cruel, but the dog doesn’t seem to mind, and I’m a little torn with the coolness of it being dressed up as a NES controller. 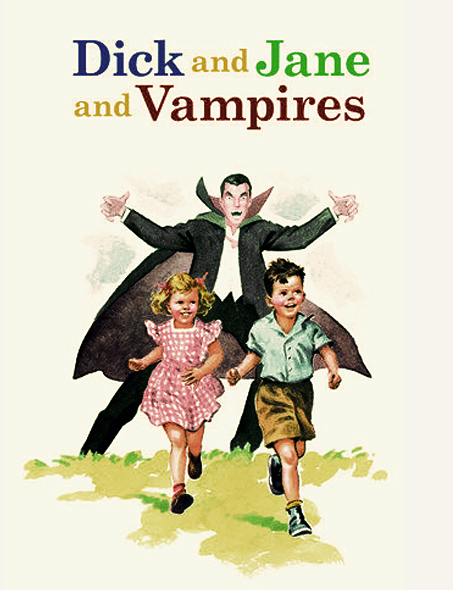 Why should adults get all the fun from mashups of literary works and horror tropes? The wall street journal has a review of this children’s book which adds vampires to the classic and often parodied Fun with Dick and Jane children’s books. I like the trend of taking works that have fallen out of copyright and messing with them. You can read the whole reivw over at Speakeasy – WSJ.

In general it’s a positive review, I’ve not got kids, and my only exposure to the Fun with Dick and Jane books has been people taking the pictures from the book out of context and using the fact that they used the shortened version of poor young Richard’s name. So I’m not really one to judge the book.

No this isn’t going to be a post about me, I’m rubbish at that. It’s a post about the way those words make me feel. Am I the only one who finds being confronted with a little box with only those two words as guidance really intimidating? Facebook, Twitter, you name it they all seem to have a little text box that says something along the lines of “About Me” what the hell are you supposed to write in there? I don’t like to advertise what I do for a living, mainly because the second you tell someone you are a software engineer they run a mile, or ask you to fix their computer. I was in for a blood test the other day and the nurse asked me what I did for a living by way of just chatting to me, I said I was a computer programmer, and the next thing I knew she was asking me for advice about setting up a proprietary medical records database… Seriously…

I’m not one to talk about my hobbies either, I mean I play video games, I role play, I read, I occasionally watch TV and or films, I used to go to a lot of gigs because I worked in the entertainment industry, but don’t any more because I  got sick of them (And got  a 9 to 5 job that made moonlighting as a stage tech was difficult). I don’t really do anything interesting, I’m not really into any sports, I’d like to to get back into martial arts because I used to practice Tae Kwon Do (I even got a black belt) but I had to stop because I was school got in the way.

I don’t particularly consider the enormous amount  of time I’m on the internet as a hobby, but it takes up a shit load of my time, I am not a “blogger” I do blog but I’m not a blogger (there is a song in that), I try to write fiction but I’m by no means a writer, I own a DSLR and enjoy taking photos but I wouldn’t describe myself as a photographer either. I don’t think I do anything enough to consider it a hobby, I just do stuff. So what the hell do I write in the about me box when I sign up to a website? Usually I write something along the lines of it’s none of your business, or I don’t see the point in filling this out. But then I see other people’s profiles, where they describe themselves as artists or writers, or tell you of some great life adventure that they are on.

I’m not on a great life adventure, I enjoy my life, but I’m not full enough of myself to think that my dabbling in various things is interesting to people, so I don’t bother telling anyone. Is that the problem? Maybe it is, maybe I should be more full of myself. The I would be able to write things like I am a wannabe writer who has tried and failed time and time again to get a novel off the ground only to fail due to sheer laziness. Or that I’m an aspiring game developer who one day want’s to rule the world with his independant game genius, but can’t be bothered writing computer programs in his spare time because that’s what I do all day, so invariably I will never actually be a game developer. No wait that’s not confidence that self deprecating isn’t it? But isn’t being self deprecating the in thing now, surely that’s what all the cool kids are doing, you say something that is in some way self deprecating in the vain hope that people will mistake it for modesty when you are in fact as shit as you say you are, in fact you are more shit than that.

I’m not a cool kid, I’m not hip, I’m not Home with the downies (Thank you Dylan Moran for that, see I can’t even come up with my own turns of phrase).

I’m me, and I am a fairly mundane person, my wit is about as sharp as the cardboard tube you find in the middle of loo roll but I’m cool with that, I just can’t be bothered typing that in a text box that is supposed to sum up my entire existence.

Okay this is technically a post about me, but I’m not narcissistic enough to have wanted it to be, it was meant to be a rant… Honest guv.