How can this be? The solution is so surprising, it is difficult, if not impossible to believe that 100% of integers contain the digit three at least once. The simple fact that the number 8, for example, has exactly zero threes in it seems to dispute this.

The percentage of numbers with threes in them rises can be expressed as 1 – (.9)^n, where n is the number of digits. It reaches 99% at about the point where n has 42 digits.

It is interesting to note that there are also an infinite number of integers which do not contain the digit three. The simple progression “1, 11, 111, … ” illustrates this fact. 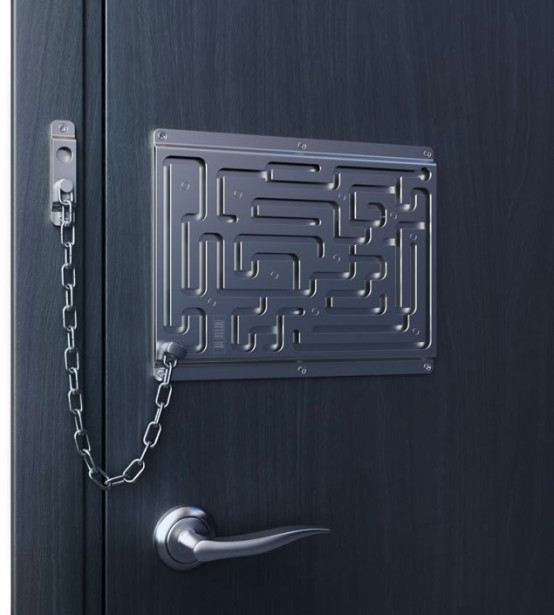 When I moved into my house I found that they had put the door chain on the wrong was round so you had to pull the chain towards the opening to release the chain, I’ve always thought these things were  a little pointless, as they are held into the door frame with a tiny screw that will rip out of the wood if you put enough force on the door/kick it. I guess they are a deterrent allowing you to open the door and not have someone force themselves into your house, but if anyone really wants to force their way in they can.

Anyway… My feelings on door chains aside, this design featuring a labyrinthine path for you to get your door open will undoubtedly mean that you will die in a fire as you try to get out of your house… Aside from that it’s pretty funky…