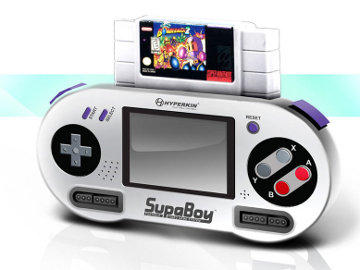 Hyperkin a company that specializes in making accessories for current and retro consoles are going to be releasing a portable SNES this summer, it’s US only as far as I can tell but I assume someone will import it to the UK or at least I hope so. Not only does it allow you to play games on the 3.5″ LCD screen but you can also connect it to a TV and plug in two controllers! Double awesome! I knew I kept all my old SNES games for a reason.

On another note Hyperkin actually make quite a few nifty devices including consoles that have slots for NES, SNES and Genesis (Megadrive) games. I wonder if they are region locked and only play US games of if they will allow you to play UK/Japanese games too?

They currently do a portable Genesis and NES though the cartridge for the portable NES is actually bigger than the console. It does come with a light gun though, for all the good that will do on a modern TV…

Sadly all their products are only available to resellers…