People have been making themselves and each other mix tapes since the audio cassette was invented, meticulously putting together songs that they like or that they think other will like for their own amusement or with the hope of getting laid. Technically this practice it illegal as you are sharing copyrighted works without permission or paying for it, but it happens on such an ad-hoc basis and such a small scale that there is no way that the music industry can do very much about it.

Why not try to monetize and incentivize  mix tape culture? Lets say there was  a service where you could select 74 minutes of Music of your choice, create album artwork and compile it into a mix CD that would be professionally burnt, printed etc and sent to you for the cost of the music, media and processing. You could then put make your mix CD available to buy on an online storefront and get a small percentage of the profits.

I know a few people who put together monthly Spotify play-lists that people religiously subscribe to, why could the same not be true of mix CDs?

I see no flaws in this plan, the artists get paid, the mixer get’s paid and the purchaser gets a physical artifact that they can keep.

I guess an extension of this would be to allow people to download the whole mix to cut the media cost, and give a small kick back to the mixer for this too.

What do people think?

My workmate InfinitySum and I just had an awesome idea. Build a replica question mark box like the ones in Super Mario Brothers:

Allow for some mechanism to hang it from the ceiling like some string (probably 4 bits of string one on each corner), and make the bottom of the box a push-able button that when hit hard enough will cause chocolate coins to pop out the top!

This is an idea that cannot fail, unfortunately I’m too apathetic to follow through with it.

The closest I’ve seen online is this: 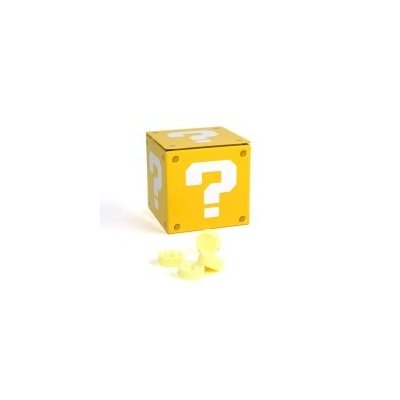 Which is more of a sweet box than an active chocolate coin dispenser.