90% of my traffic comes from people looking up Lichtensten costumes, that’s a fact. I thought I’d pander to anyone who is looking for more Roy Lichtenstein costume images who isn’t satisfied by my other two posts

The image above is I think of a Redditor, the images below are taken from the Neatorama and reddit comment threads. 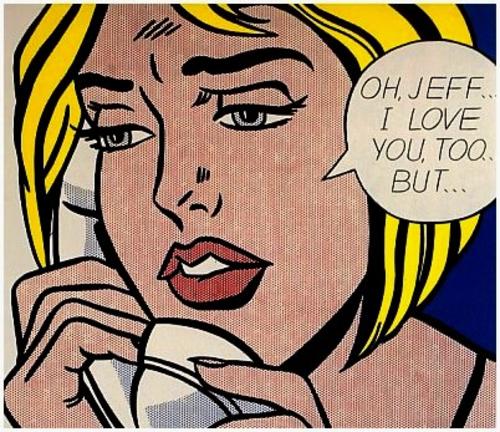 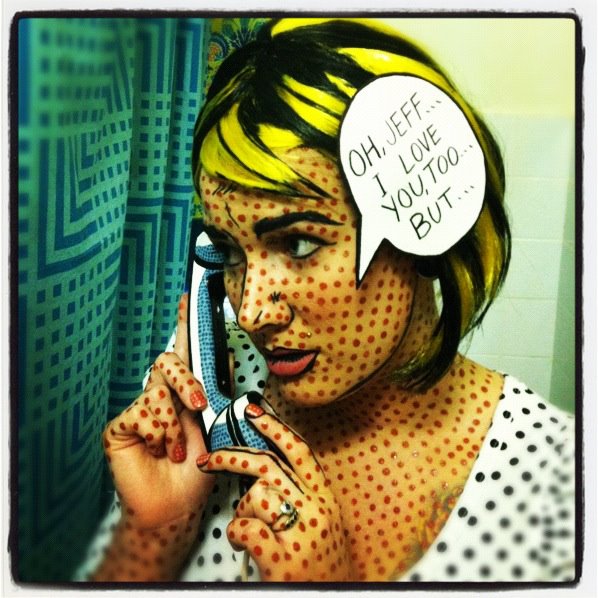 Also special mention goes to Robots in disguise’s music video for featuring themselves in Lichtenstein esque make-up (23 seconds in): 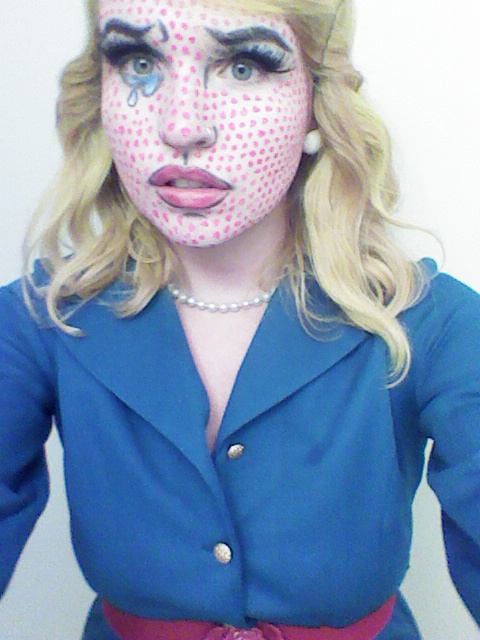 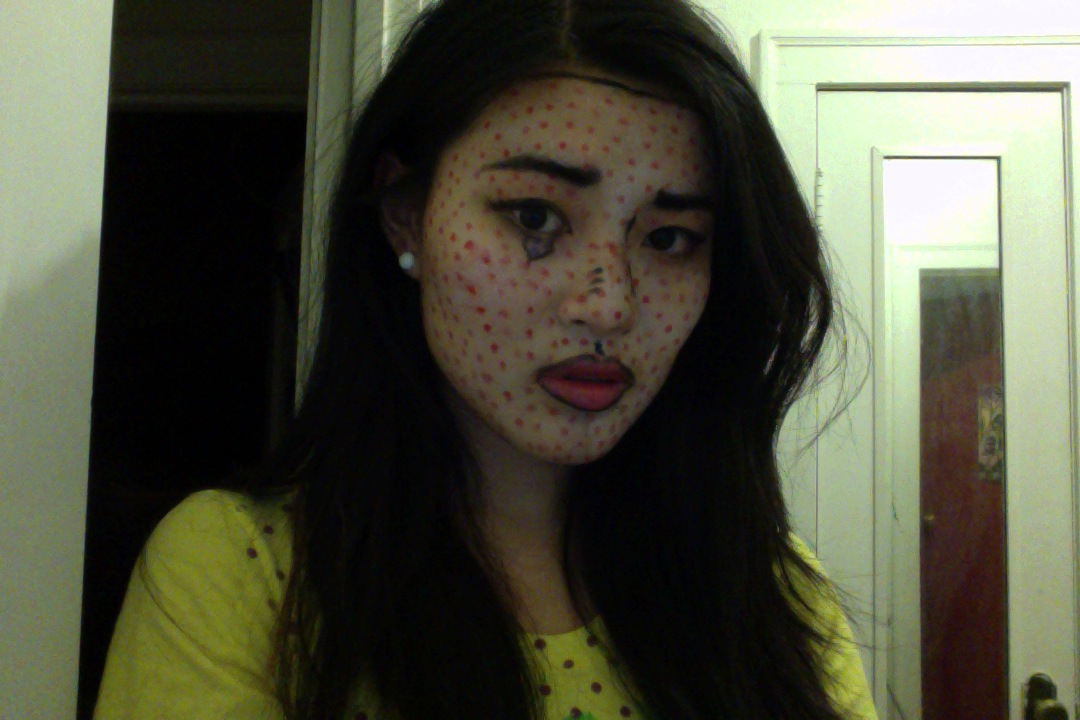 These images are of Ashley B from Passedina Texas: 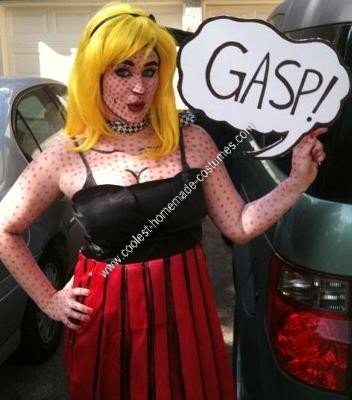 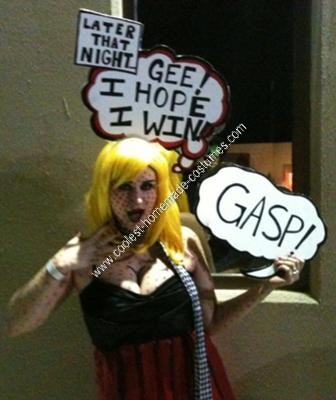 After too many years of the same tired ‘ole remakes and trashy costumes everywhere, I decided to liven things up a bit! This Roy Lichtenstein comic book Pop Art really pops to life (get it?) with this homemade ensemble.

I spent hours polka-dotting myself silly and adding bold comic lines around my features. I sewed heavily colored fabric together to make the dress and lined pleats with fabric paint. I painted heavy lines on high heels and created a foam poster board “thought bubble” that read “Later that night…”GEE, I HOPE I WIN” (a nod toward any costume contests I would enter 😉 and hot glued it to a headband that I bought at a local craft store.

I created another foam board sign that read “GASP” to complete the comic look! On my legs I drew in knee-caps and added a “cross-hatching” effect. It took a good while, but I was stoked with the end result!

These by Erin English of Littl falls NJ: 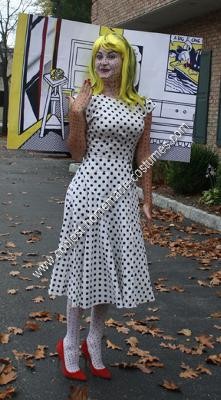 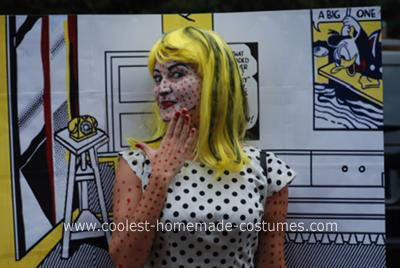 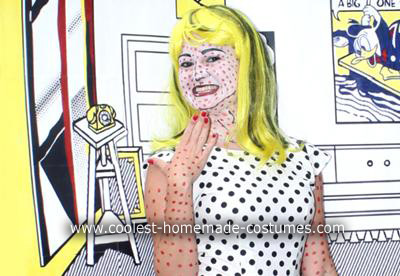 This is a picture of the woman in the Roy Lichtenstein painting as an actual comic book character.

For this homemade Roy Lichtenstein comic girl costume I purchased a yellow wig and painted black lines in it. I also purchased white stockings and painted polka dots on it. The earrings I made out of cellophane balls. The dress was just a polka dot dress that I have laying around the house. I coated my face with white paint and put red polka dots. I outlined all my features with black liquid eyeliner. I continued the polka dots on my arms with red acrylic paint.

I printed out one of Roy’s paintings and attached it with black ribbon with ribbon arm bands.

And these are by Lupita From Sacremento California: 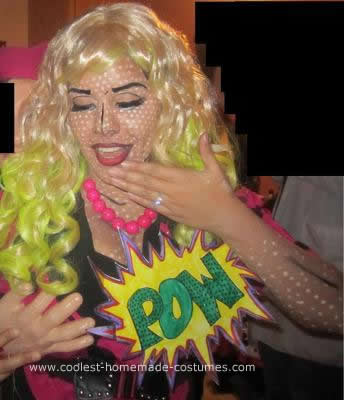 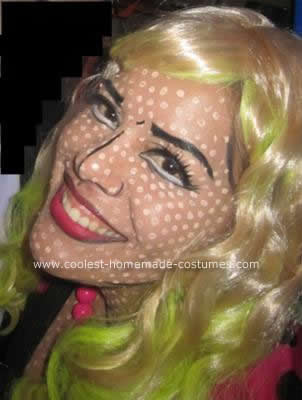 This Homemade Comic Book Pop Art Costume was inspired by Roy Lichtenstein pop art. Every year my goal is to wear a costume that’s original. I hate spending too much money on costumes sold at the store for two reasons, (1) the material is cheap, (2) 87 other people will probably be wearing it as well. This year I decided to do be Comic Book Pop Art which involved paint, make up and markers. I used some clothes that I already had and painted my wig yellow at the ends. It took me about 2 hours to create this cartoonish look. The dot placement and black outlining were key to creating the pop art style seen in comic books. I outlined my eyebrows, eyes, lips, nose, collar bone, cleavage, chin, cheeks, ears, arms, elbows and even my feet and created a “POW” out of markers and poster board paper.

This costume is for sure one of the coolest costumes that I have created.