You may have noticed I’m clearing out my backlog of draft posts… I’ll let the guy who created this awesome Skeletor/Darth Vader bust put it into context:

“I was picked to create a custom Darth Vader helmet by Halloweencostumes.com and I decided to turn my full size replica helmet into a bust of Skeletor. As I was creating this colossal custom I decided to Incorporated a few more elements into the piece that would represent Vader. So I created the sword of power but used Vader’s light saber for the handle and I Incorporated the Empire logo into his chest armor.” 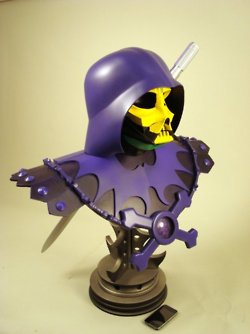 Via Illuminations and Other Stuff.