This video shows a Delorian which has been turned into a hover craft, do you need to know any more?

This cheesetastic video was apparently played during an Apple sales meeting back in 1984. According to YouTube Commenter majorkahuna:

I was there in Oct. 1984. This was not an internal ad. I was a 1984 state of the art multimedia slide show with audio by Ray Parker Jr. who sang the original. There were also live dancers on the stage.

This was the opening presentation of the International Sales Meeting that introduced the Lightwriter later renamed Laserwriter.

Apple always used a current movie as a them for the sales meetings. in 1985 it was Back to the Future.

For the record I had a quick look and can’t find the 1985 Back to the Future video on YouTube… This makes me sad. 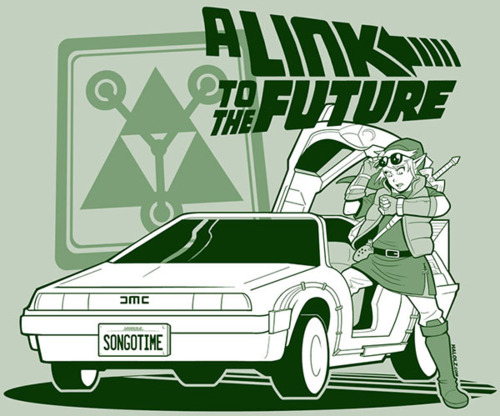 This Back to the Future/Zelda crossover design is pretty cool, it took me at least 30 seconds to find the origin of this image. It’s available from Level Up Studios as a T-Shirt and I think it’s by artist Caldwell Tanner.

via Far away from this world….