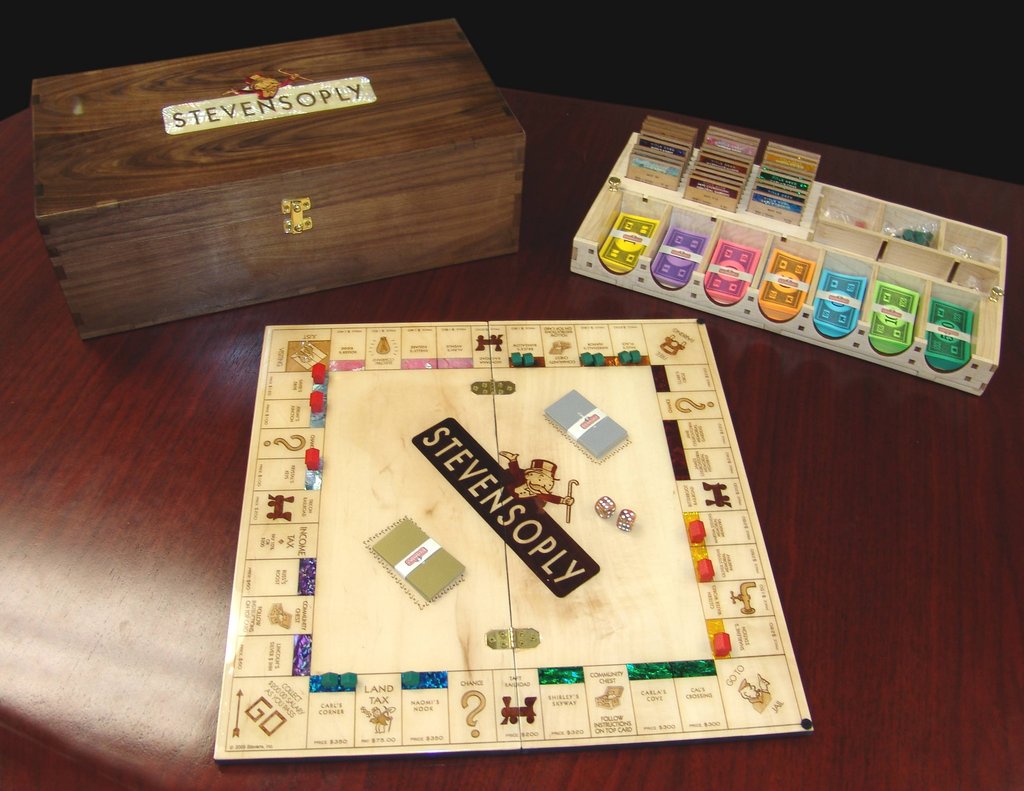 I found a link to this on Reddit user jellatin works for a “laser company” called Universal Laser Systems and his coworked apparently spent 600 hours designing and building this Monopoly set. 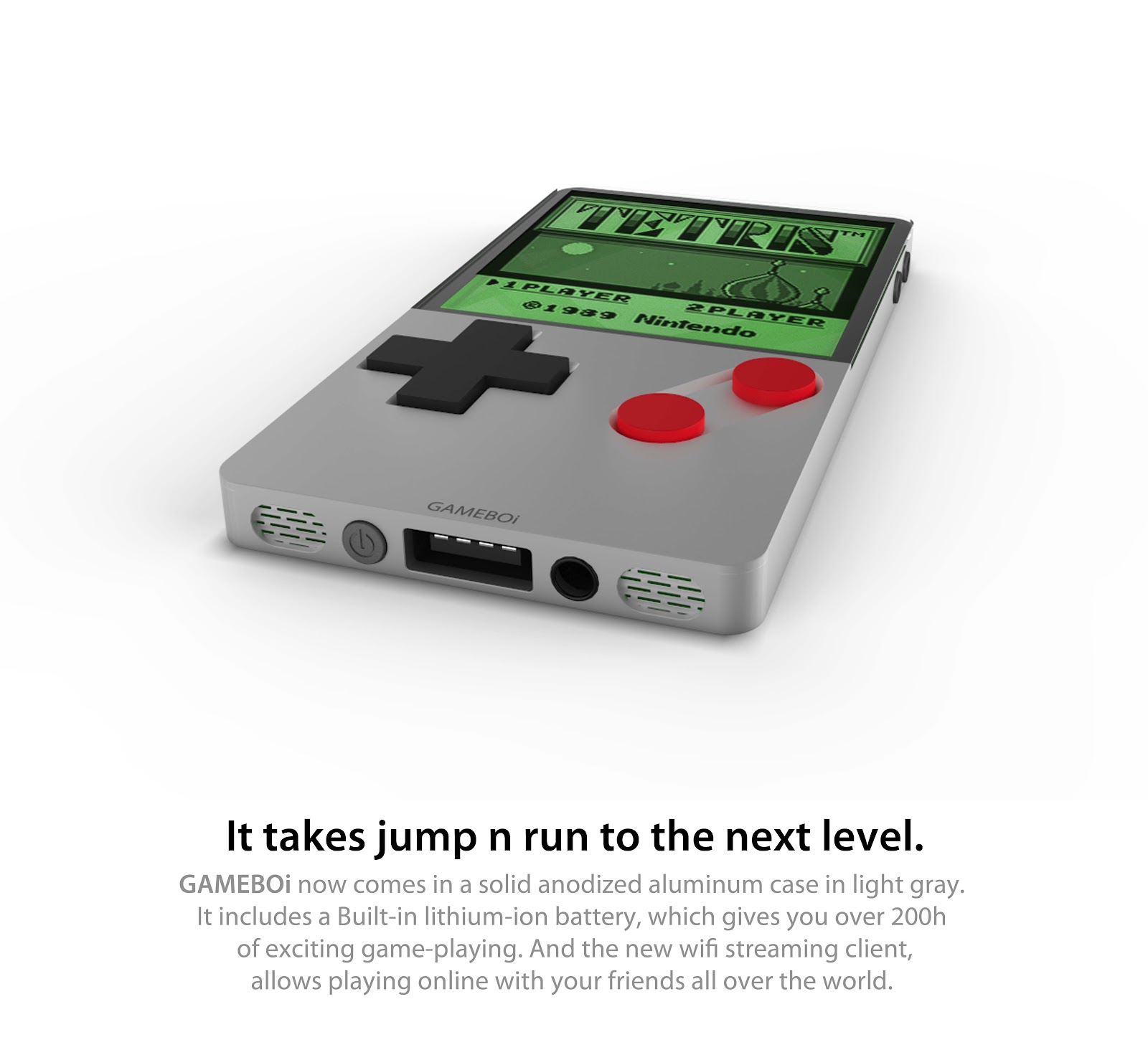 Artist Patrick Staudt re-imagines the Nintendo GameBoy as it would have been designed by Apple. The thing is the original GameBoy was  released in 1989 at about the same time Apple released the Newton. I think for a game playing device the GameBoy is definitely more iconic and probably better designed than the Newton… 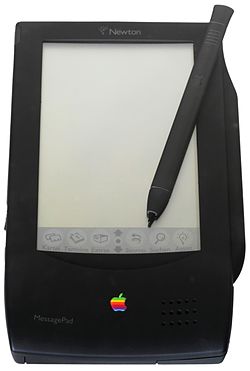 Also if apple designed the GameBoy right now we would probably just end up with the iPhone,iPod Touch or iPad because lets face it those products do what the GameBoy did and are both stealing market share from Nintendo and Sony.

But if hypothetically Apple’s design engineers went back in time and took with them the technological advances that allow them to make the iPhone so slime but not the retina display and their hatred for physical buttons and decided in their infinite wisdom to stick a green and black dot matrix screen on their design for the GameBoy then it might just look like this (More comments inline, Comments may be sarcastic…): 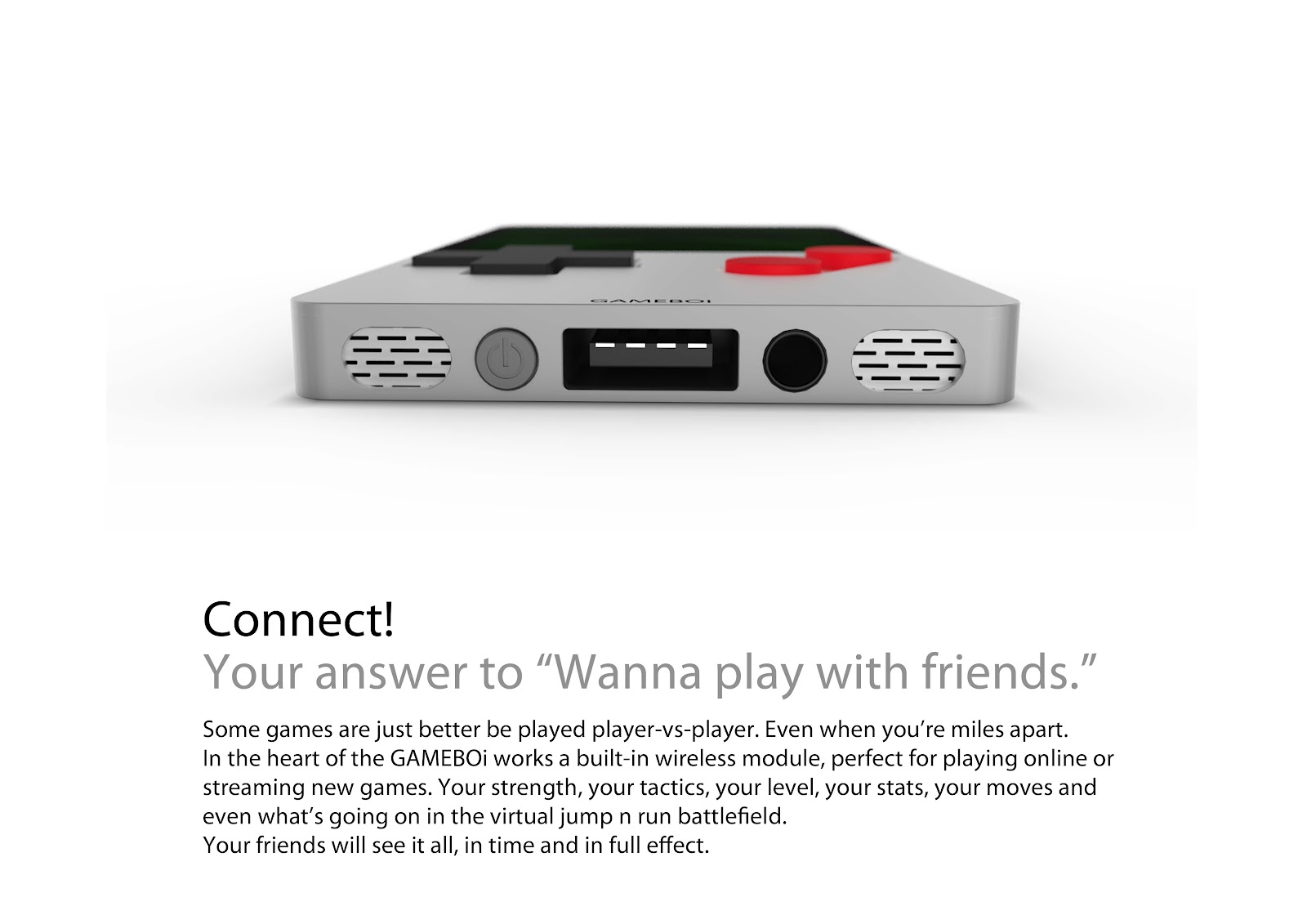 Wireless? Wirelessly connecting to what? The internet didn’t even exist at that point. And modems maxed out at 28.8K in 1989 (Or there abouts). You might have had IR connectivity but that would have been slow as hell too. 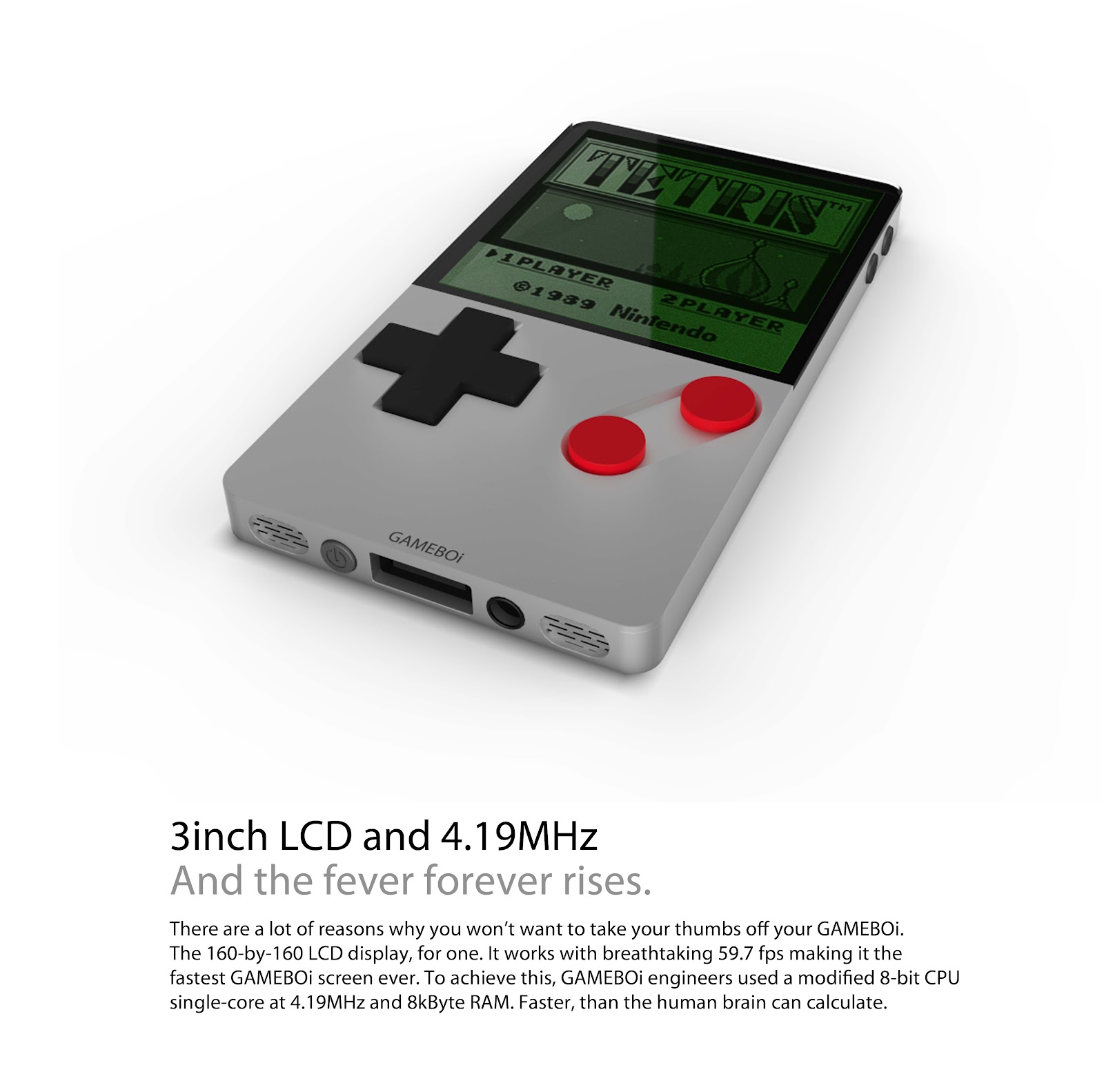 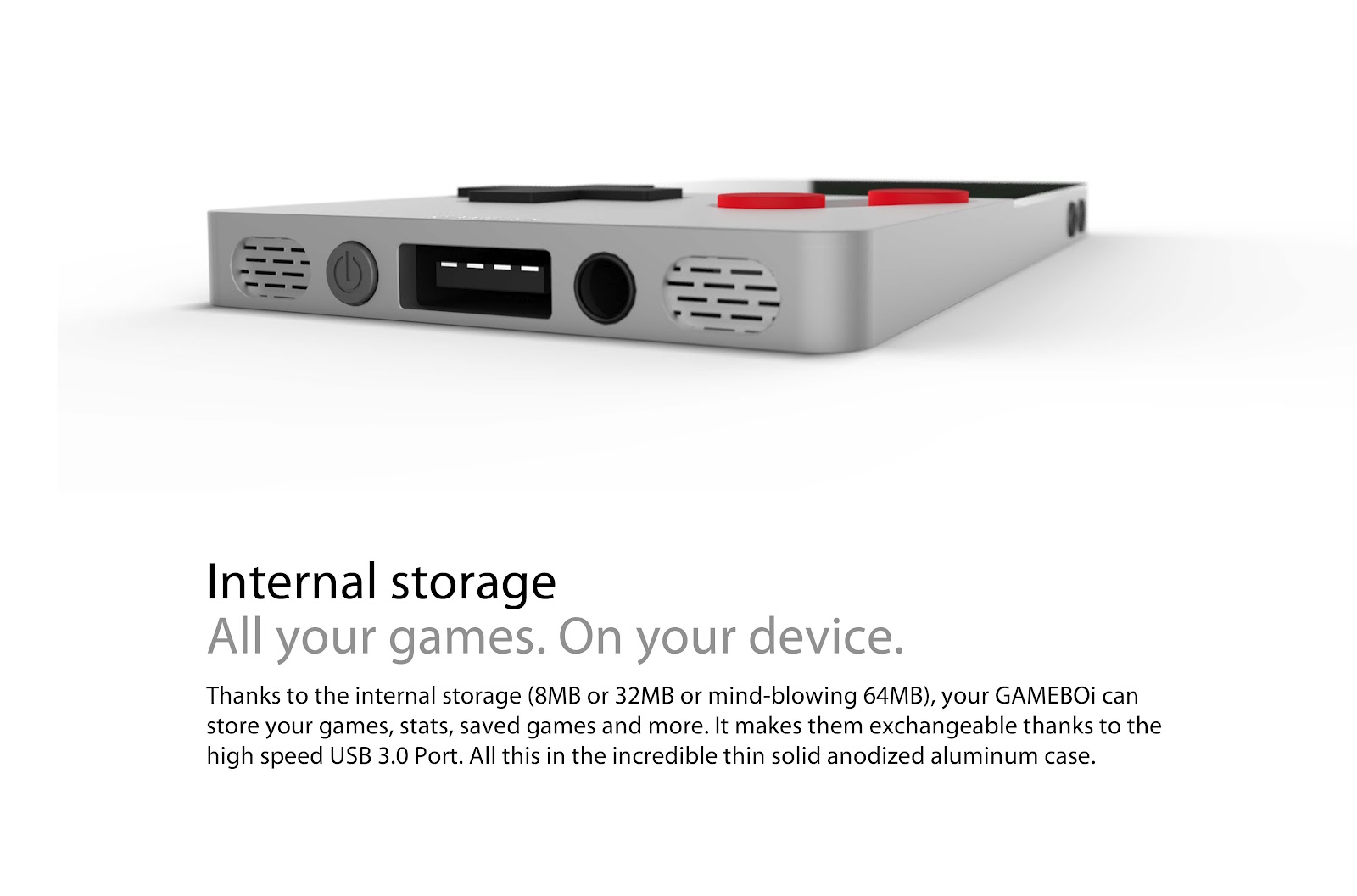 I’m willing to bet he thought he was being clever by going that small… In that size of packaging you’d have been lucky to squeeze 8Mb into that device if you wanted room for other electronics. It wasn’t till 1991 that you could even get a 100Mb 2.5″ drive a 2.5″ drive is about the size of an iPhone…

Okay so they are designing it now… Otherwise how WiFi? The WiFi alliance wasn’t formed until 1999. Still 200 hours of gaming on a battery that fits in that case? Even with a DotMatrix screen the original GameBoy managed 10-12 hours on 4 Batteries. What fantasy world do they live in! I want to be there! But I can’t! Why am I shouting! 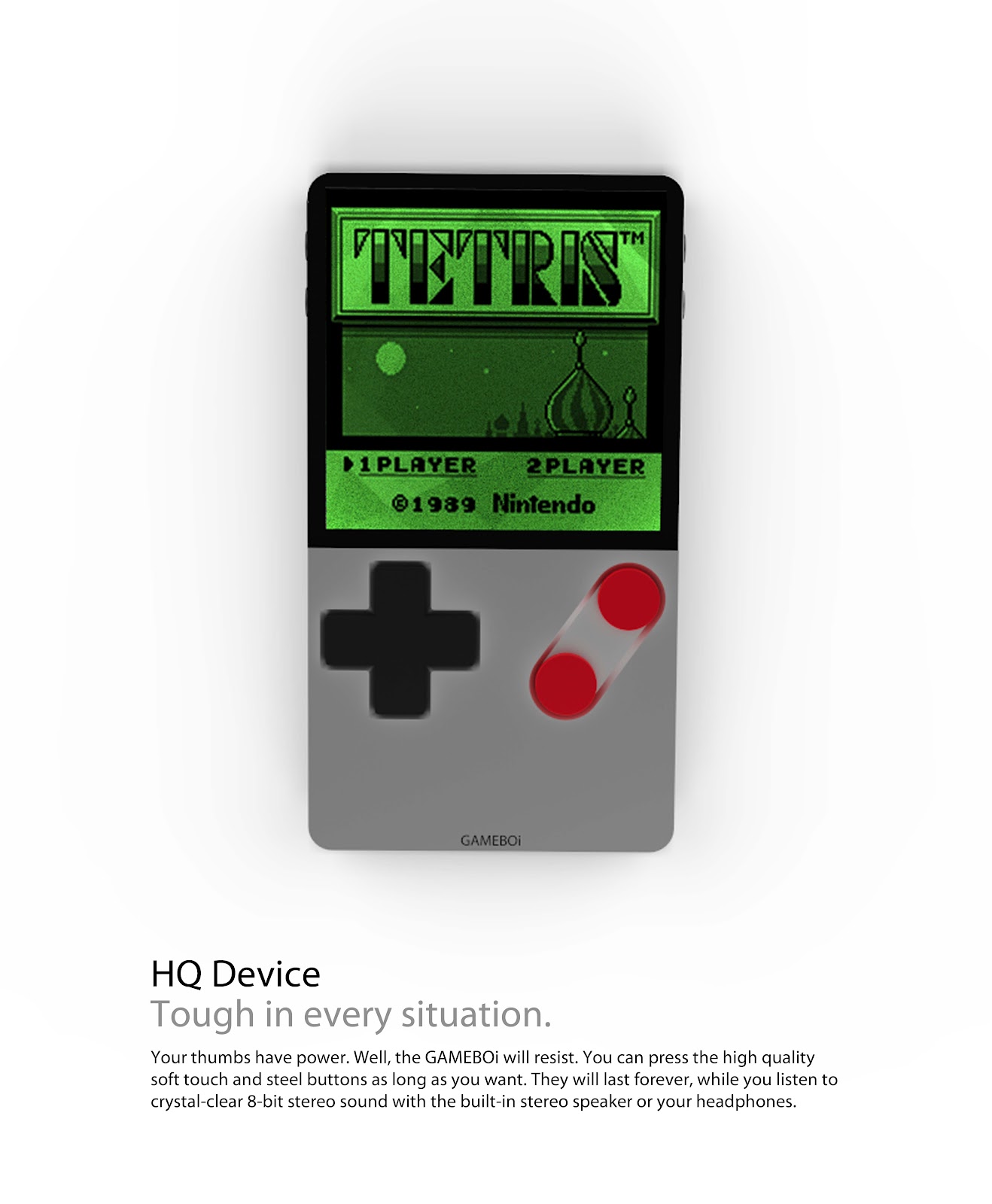 My thumbs have power… Also zero mechanical failure? That’s impressive, except my Old GameBoy that I got in 1989 still works, so not that impressive… 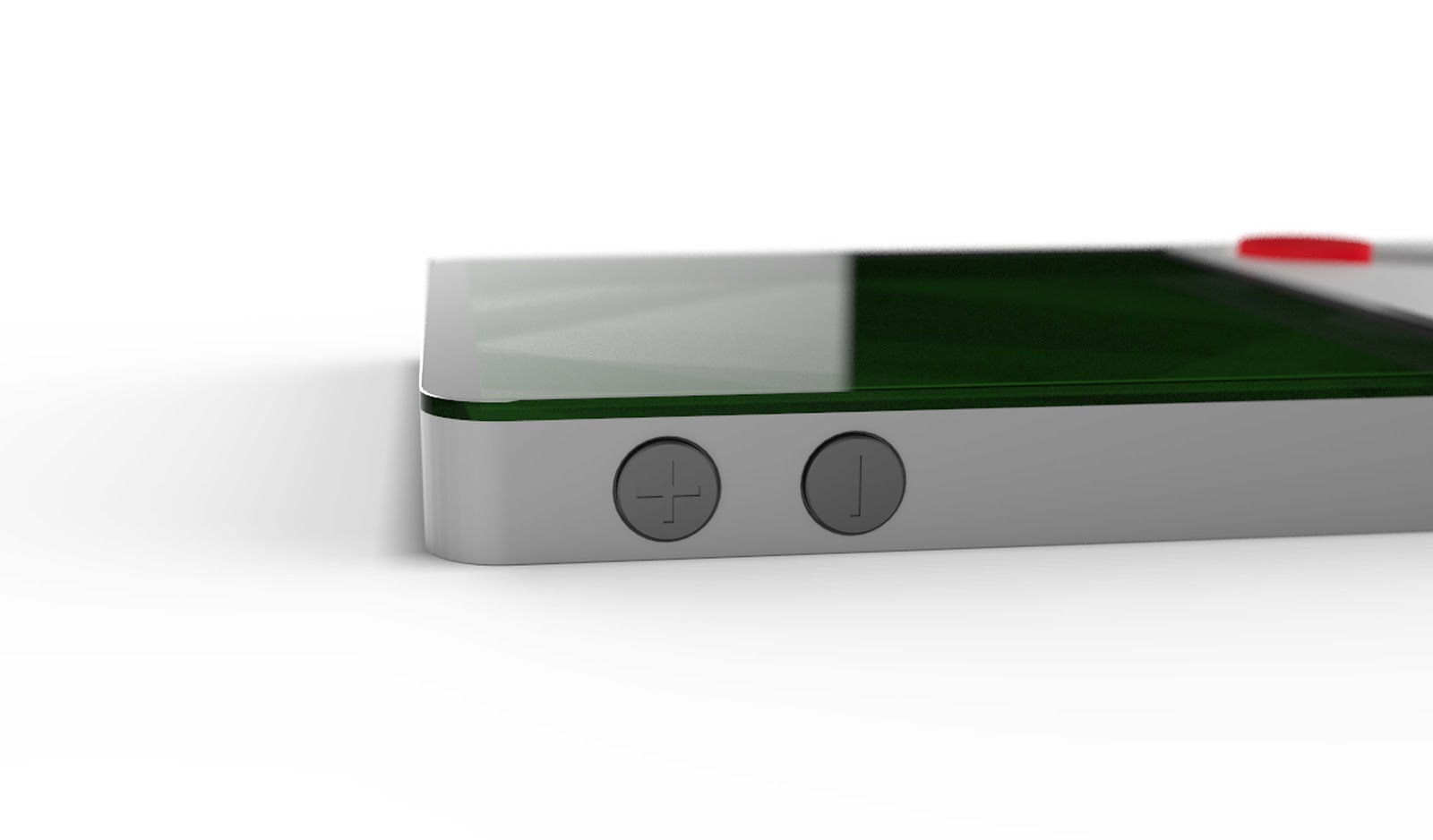 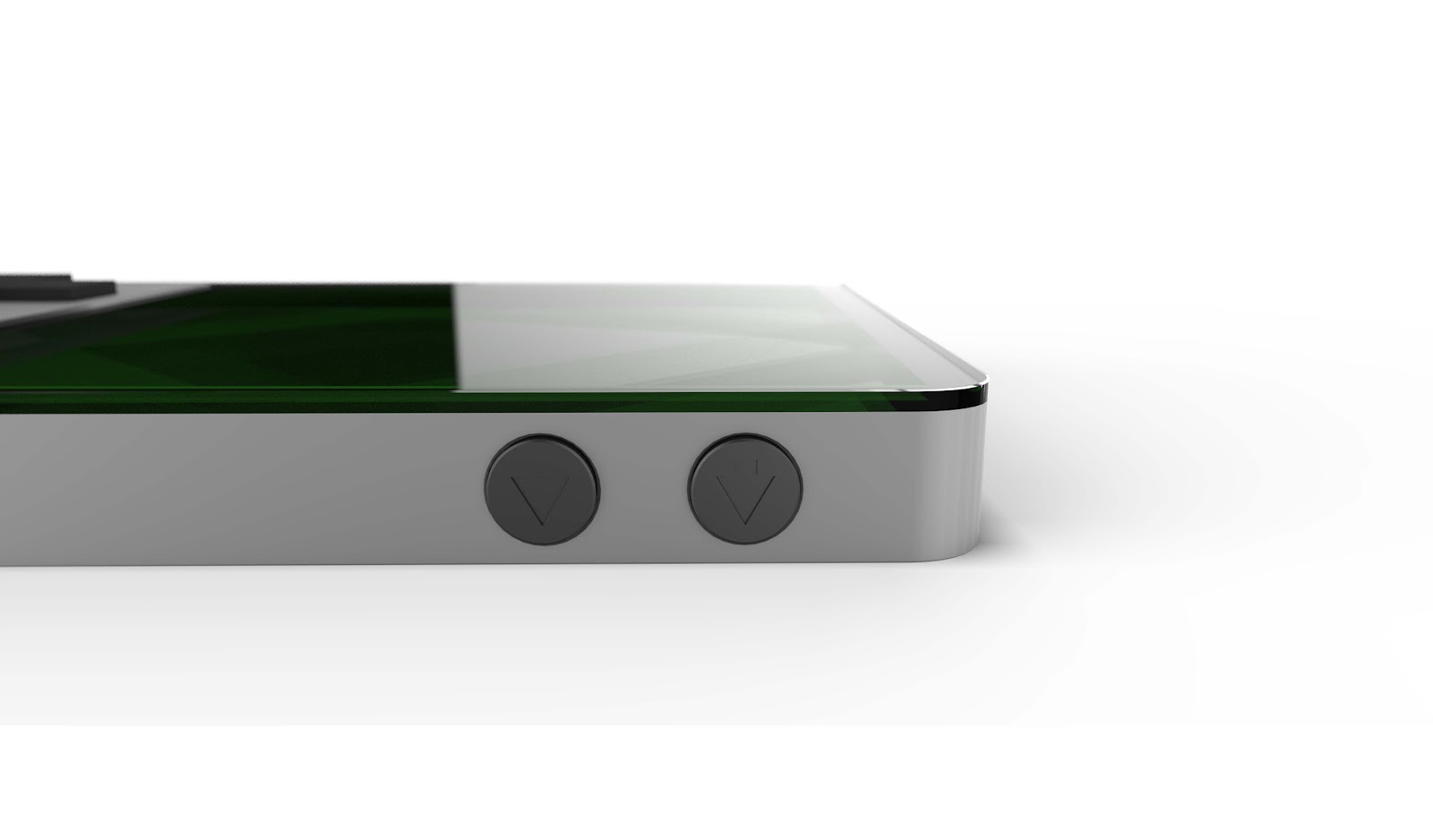 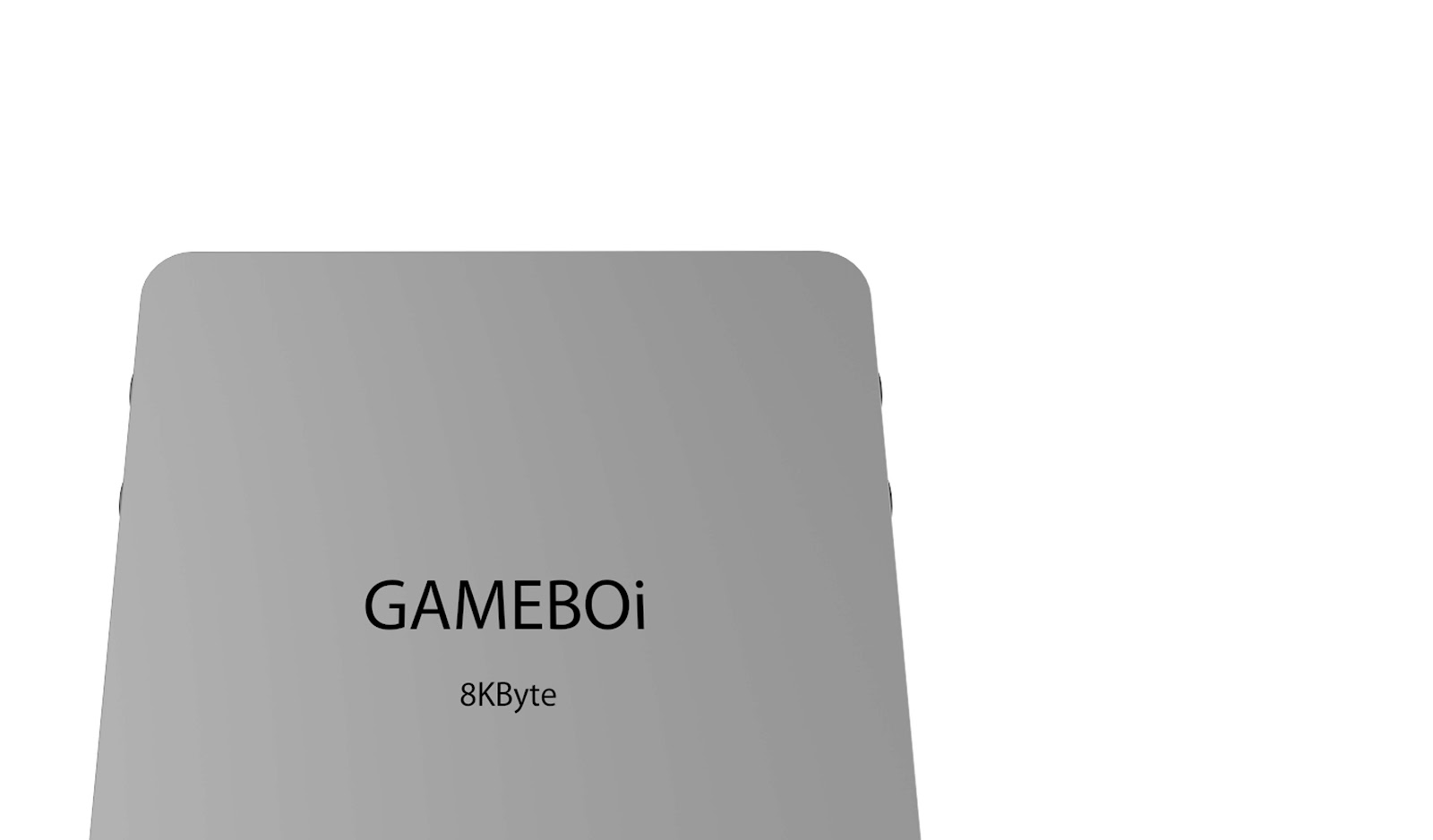 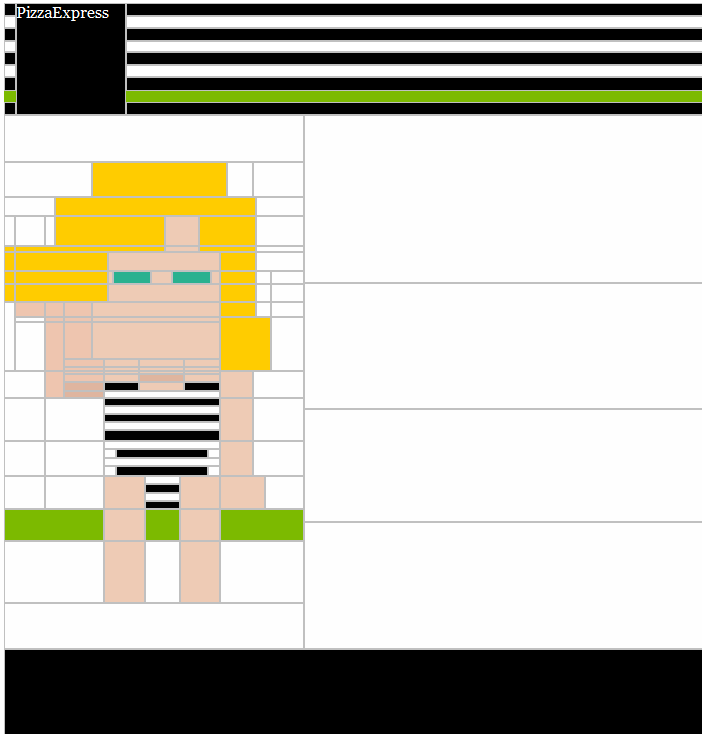 If you use a sensible email client you will probably have noticed that most of your emails will not initially load when images, this is great for the user, it speeds up the process of downloading all your mail and means you can skim through your mail without having to wait ages for images you don’t care about to load.

This isn’t however very good for email marketers who use images to convey information to you. I’m sure you are used to receiving a lot of emails that make no sense because they don’t have any images in them. It seems that Pizza Express (A UK Pizza Restaurant Chain) have cottoned on to the fact that not everyone downloads all the images from their correspondence emails, so they have taken to formatting the emails quite cleverly, this is what an email I received today looks like without the images having loaded:

You can clearly see that it’s someone in a stripy costume holding up their hand to their hair (or maybe a pizza?) Below that there are details of the offer and how to get a voucher code in plain text.

Once you load images this is what the email looks like: 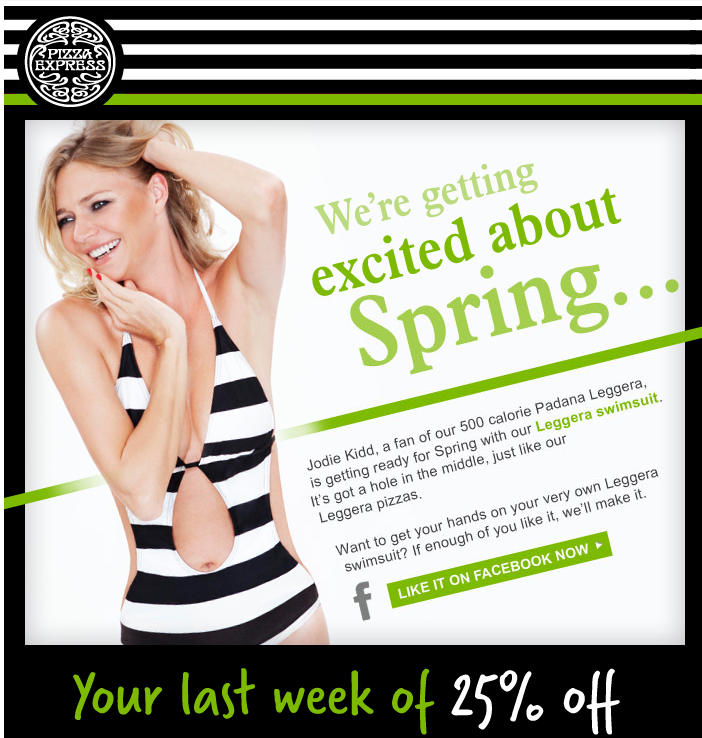 It’s a blonde woman in a stripy swimsuit holding up her hair. Looking at the image it’s obvious that the non image version is based on  this, the graphics in the non table version maybe reminiscent of an Atari 2600 game but they convey the same details as the image version, and they make you stop and think, I wonder what that is supposed to be maybe I’ll download the images. 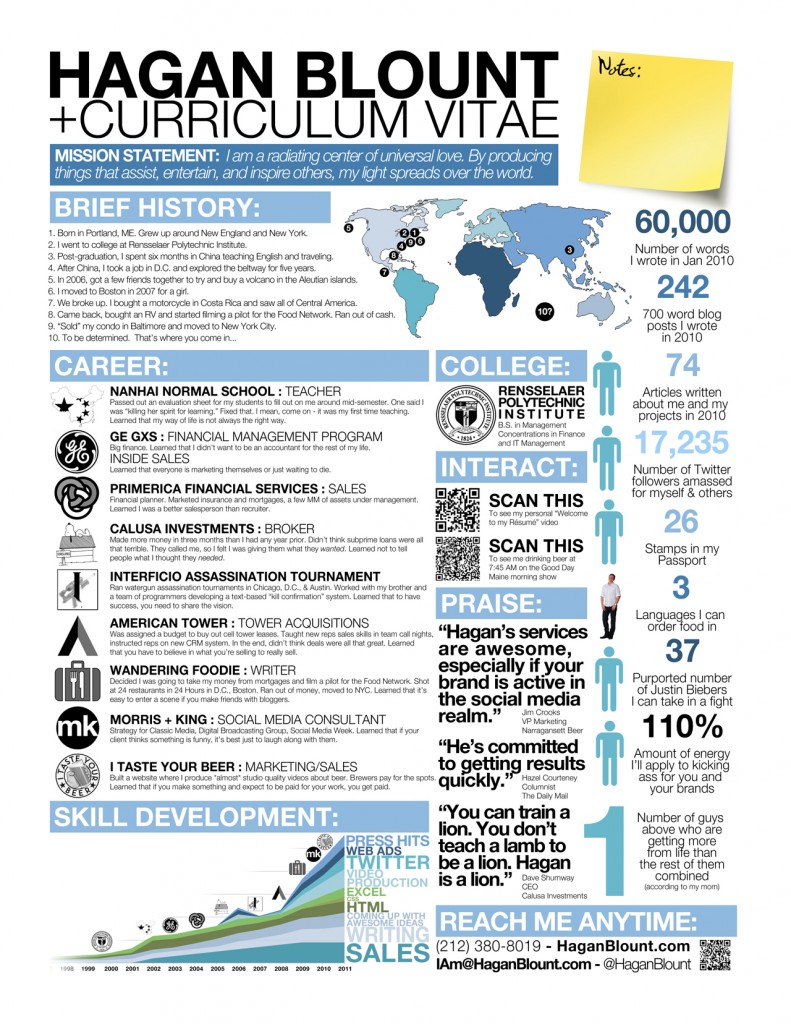 A friend on Twitter posted a link to the above CV with the quote “This is an awesome CV” and to look at it from a distance sure it looks really swish. From a design standpoint it is really cool, It’s beautifully put together  and looks like on the surface this guy is awesome. But looking deeper there is very little in the way of content on the CV sure it shows that he has a sense of humor, but to be honest it looks like it’s mostly hot air.

I’ve got no knowledge of the industry that Hagan Blount is in, and I’ve got nothing against him, but this CV seems to be all form and no function.

The map looks cool and makes it look like he’s well traveled (At least in the US) but most of the steps in there are stuff that went wrong not reasons I’d hire him.

I like the fake post-it note at the top of the page, I’m not sure anyone would bother using it though.

The Career section looks good, I like the logos, I like the design, but the content seems to be a string of digs at the industries he was in or reasons he left/failed, dates would have been nice though

The education bit tells you all you need to know, again I like the logo being there, if I were recruiting him I’d like to know how long he studied there for and maybe what his degree was about.

I like the use of QR codes, kinda… He’s making the recruiter do more work though, not making their lives easier, the QR codes both scan but I’d have used a URL shortening service for the second one as it’s got a lot of dots. I appreciate the market he’s going for and that this makes him very “new media” (I assume QR codes are new media, they were invented in 1994 but are only just starting to see widespread use outside of Japan, although a friend noticed a job advert recent that called email new media…).

He does make the assumption that the person recruiting him knows what a QR code is though, there is no explanation for these boxes of seemingly random noise on his CV.

I’d have skipped the praise bit, and if I hadn’t I’d have made it smaller, the praise is full of platitudes and hot air, this would drive me away as it looks made up.

The sidebar with the statistics seems a little odd, he only wrote 60,000 words in 2010? I wrote 30k+ in November last year and that was for one project I did in my spare time. Also I’m not a creative. I’m not going to go into his blog posts and what not as I’m not sure a recruiter cares about this. This section goes down hill and wastes space.

In summation there are a lot of good ideas here design wise but it kinda falls apart on content. I think the design of the CV possibly makes me expect better content though, he sets the bar too high for himself. If I was a recruiter my first reaction would be to go wow this looks really cool, then having read it I think my reaction might be oh… Meh…

Does he shoot himself in the foot with this, I don’t think so, I don’t even work in the same industry as him so what do I know, I guess the point of a CV is to get yourself noticed, and this CV certainly does that.