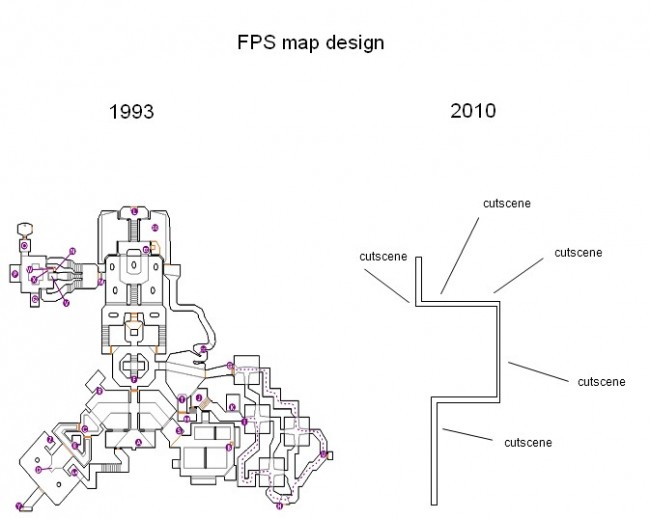 I may not be an FPS fan, but I think the above applies to an awful lot of games, especially Final Fantasy XIII, which is so linier  it’s painful. I do remember how complicated games used to be though, I remember both hating a loving getting lost in them, mainly because my sense of direction in 3D games is terrible, especially when everything looks the same.

I appreciate that game designers are creating games with such graphical quality that every corridor takes someone a year to design, but is it really worth it if all you get to see is the one corridor?

Also don’t get me started cut scenes and bloody quicktime events… I think game design is suffering because game designers are bowing to the almighty polygon and making everything really pretty at the expense of game play, I’m not alone in thinking this.

I’m going to stop this rant now, because it’ s not going anywhere and I’m tired. Suffice it to say I agree with the image and it makes me sad.

I’m posting this mainly so that I have it noted down somewhere that I will remember it. Squidi tried and failed to come up with game mechanic a day for 300 days a while ago, he initially stopped at 50 but has since  reached 109. Some of them are really cool, some of them would never work. But most of them have some pretty neat ideas that could lead to some really cool games.

There seems to be a bit of focus on RPG type games with CCG mechanics in them. But he’s also come up with some fairly inspired ideas which have nothing to do with those game genres.

Squidi it seems has an interest in procedurally created content, so some of the games draw from that. He’s also started what he calls the “Free Pixel Project” which has a collection of sprites he’s licensed under a creative commons licence for all to use.

On the subject of Game design and challenges I thought I’d also highlight that  Nathan McCoy is in the middle of a challenge to create a game a week, which he blogs about and posts the source code to on his blog. So far he’s written 36 Games and although I’ve not played any of them I really like the idea of this kind of challenge so I thought I’d write about here in case anyone was inspired to do the same.

I’ve been meaning to start some game development work for some time now and I think that it’s possible that I might try and go down the route of a personal development challenge like this at some point. (Maybe next year?) At the moment I’m a bit busy with My 365, which I’ve not been posting here very often on account of most of them being crap, and my being lazy. But I think that doing a thing a week rather than it having to be daily might be a good compromise, as someone said to my of 365 projects, “You just end up taking a photo of anything” which I guess is true. Some days I feel inspired and other days it’s hits 10 to midnight and I end up taking a photo of the ground, or my hand, or a wall just to have done something…

Does anyone else know of any good examples of people doing personal game design/coding challenges?

[UPDATE:] This will teach me not to Google before I post:

AGameAWeek.com is a project by “Jayenkai” to do just that.

I’ll update if I find any more.