I’m going to weigh in on the off chance I’m right but here are my expectations for the apple announcement today:

I don’t think any of this is rocket science, I think it’s business as usual. I’d like to see the Apple TV turn into a console/entertainment centre but with Valve thinking about releasing one and the way that Google TV is going I think that the market is too saturated.

I know this is cliché, I don’t actually care very much as I doubt I’ll be buying anything that Apple announce today, but I thought I’d weigh in.

This is the first big Apple event since the death of Jobs, I predict lot of people are going to be comparing Tim Cook to Steve and most of them are going to say that he doesn’t have the same charisma. It’ll be interesting to see how well whatever Tim Cook announces sell without Steve’s “Reality Distortion Field”.

If Apple announce a Pippin 2 I might want one though… I really wanted a Pippin when the first one was announced. 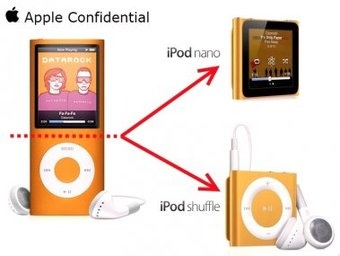 I can’t believe I didn’t notice this before. Apple have refreshed their line of cheap iPod, by gimping the Nano and adding a touch screen, and making the shuffle tiny and reverting back to their it’s old design (Why they didn’t call it the shuffle classic I don’t know). The above image shows an artist’s impression of the design process behind the new iPods.

Personally I’m a little disappointed that they haven’t released a new iteration of the classic, as someone on twitter said to me I think apple don’t know what to do with the classic.

The Classic’s form factor is almost perfect for what it does, there is no point in increasing the hard disk size; as although it can play video there is little point in doing so on such a tiny screen, and believe me I’ve tried watching TV shows on it while at the gym it’s was not a pleasant experience. Upgrading the hard drive to flash would mean decreasing the capacity or make buying one require a mortgage, both of which are not really viable.

The reason I got a classic when I did was because I have over 80 gig of music on my iPod, I don’t want to have to sift though that to make play lists for a smaller iPod and I’m not going to pay £329 for what is essentially a downgrade in size.

Sure the iPod touch has a touch screen and apps and a camera, but I carry around a phone that does that too. I’m not going to use my phone as an MP3 player either because the battery on modern smart-phones lasts at most a day when you only use it as a phone, using it as an MP3 player too would mean that I’d pretty much have to charge it three times a day.

So I stick with my classic with no upgrade path in sight and you know what I’m happy with that, I’m on my third iPod in the Classic series, I got a 4th gen iPod which died a horrible death,  a 5th gen one which I left on a plane, and my current “Classic” which does everything I want it to. The hard disk is just right, the battery life is just right and the size of the device is just right. I feel like Goldilocks in iPod-land. You can have your Papa bear iPod Touch, or your Mama bear iPod nano my Classic is just right for me.

On a side note, if you really want to rile up an Apple store employee you should call the “iPod Touch” the iTouch, they hate it when you do that.

Via  The Jason Calacanis Weblog.