There are two types of board gamers, those for who the theme of a game is important and those for whom the theme of a game doesn’t matter a toss as long as the game has solid mechanics. (OK so putting everyone who participates in a hobby on a binary like that is ridiculous but I’m not exactly about to formulate an ontology of board gamers based on mechanics Vs. theme I’m just writing the opening paragraph to a shitty review, calm down…)

I bought Tanto Cuoro as a gift for a friend, partly because I’d read that it wasn’t terrible, and partly because she is obsessed with some really weird Japanese niche cultures. I wasn’t expecting the game to be that good, I didn’t even expect to play the game at all to be honest. But then I did…

At it’s heart Tanto Cuoro (Which is Italian for “A lot of heart” apparently) is a deck building game not dissimilar to Dominion, your goal is to assemble the a collection of maids to serve you and become the ultimate master of the house.

Each turn you get a hand of cards from you deck which contains a set of maids and or some “Love” cards which are the games currency, (Yes maids are paid in love not money, I’ll let you think of that what you will) and initially you are allowed to be “Served” by one maid per turn.

Being served by a maid means you play that maid and gain the benefits that maid provides usually this is one of:

Love is spent in the Town where you can either employ maids or purchase events, the maids you buy are added to your discard pile and are shuffled into your deck when it runs out, you can also buy private maids which don’t go into your deck but give you an ongoing effect which is usually helpful. 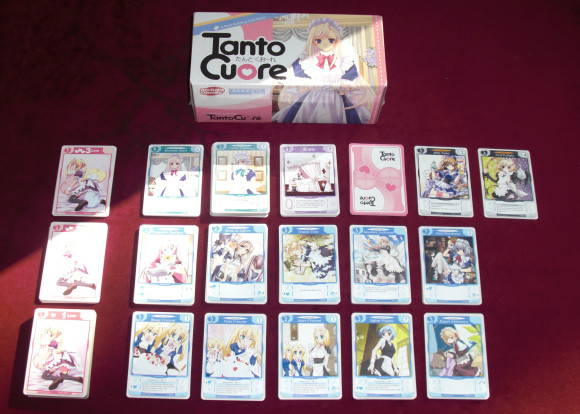 Events are basically a way to screw the other player over by making their maids ill which negates their bonuses, or giving them bad habits which loses you victory points.

You can also promote maids to “chamber maids”, which takes them out of your deck permanently and may give you bonuses at the end of the game.

Once two of the piles of maids is depleted the game is over and each player tallies up the the maids in their house hold and whomever has the most victory points wins.

I wasn’t expecting to like this game, don’t get me wrong, I didn’t think it would be a terrible game… I just didn’t think it would be for me. I actually really enjoyed playing it though. Behind the cute anime maids in skimpy maid outfits, are some pretty solid mechanics, the art is also very well done if you are into the theme then that is a bonus, but building a household of maids and then trying to figure out how to chain them to get the most victory points is actually quite fun.

I’ve not played Dominion in 5 years, so the rules for that are a little rusty in my head, but I think this might oddly have a little more depth than the games of Dominion I played, which I found surprising.

If you like deck building games and either the theme appeals to you, or you are willing to ignore it then this game is well worth a look. Also if you don’t want to invest in the physical game there is a version available for iOS and while it’s not free it’s pretty cheap (£2.49 last time I checked) it also benefits from having a tutorial built in to it and varying levels of AI. 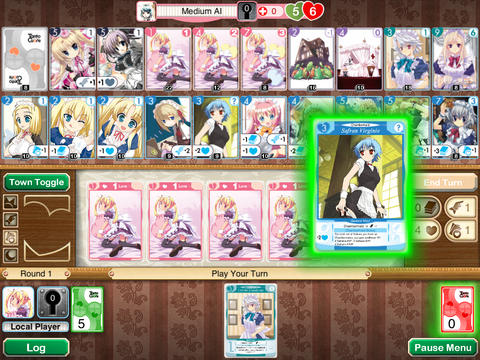 My crowning achievement was chaining a set of maids to add love and servings to my pool such that I managed to accrue 18 love allowing me to employ two copies of “Marianne Soleil” who is worth 6 victory points.