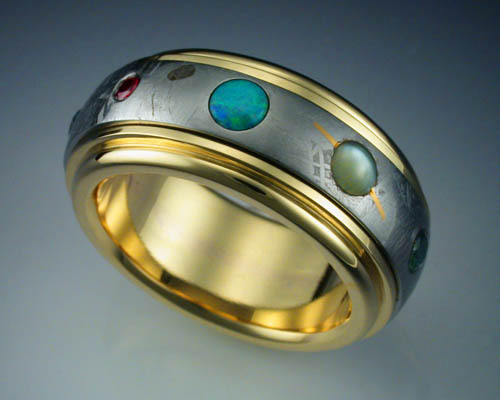 I’m not the kind of guy who likes to wear rings or any kind of jewelry for that matter, but I might make an exception for this “9 Planets Ring” available from Jewelry Design For Men, it’s only $4,200 too!

This ring features a complete band of Gibeon Meteorite framed and mounted in an 18k gold band. The meteorite has been etched with nitric acid to reveal the characteristic patterns, or Widmanstatten figures, of iron meteorites, and set with 9 gemstones representing the planets of our Solar System. Mercury is represented by a rust colored Sapphire, Venus a golden Sapphire, Earth an irradiated blue Diamond, Mars a Ruby, Jupiter an Opal, Saturn a Cats Eye Chrysoberyl with an inlaid 24k gold ring, Uranus a green Sapphire, Neptune a blue Sapphire and Pluto a black Diamond. What really makes this ring special is that the band of meteorite spins independent of the gold ring, so when it is on, the planets rotate around the wearer’s finger. This ring weighs 26 grams, is 10 mm wide and is a size 11.5. It cannot be sized, but can be custom made in any size. There is also a narrower, 8.5 mm wide version available. The price of the ring is $4200.00 as shown, while the narrower version is $3600.00

Bargain! Although I’m not a big fan of gold so I’d probably ask for it in Platinum just to add a little to the cost…

Reminds me of the guy on Reddit who forged his own wedding ring out of space rock!

This ring was posted on Deviant Art by TheBoog17:

The setting of this ring was custom made for a customer using our 3Design CAD CAM software and cast in 14k white gold.

The setting is designed to look like the symbol of an evil robot organization. The mask setting is two sided, and the prongs holding the Moissanite gemstone in place are the robot’s horns, which I thought was pretty cool.

The ring in this picture is blown up quite a bit, so as you can see the fine detail work is mind boggling.

Via Me So Nerdy