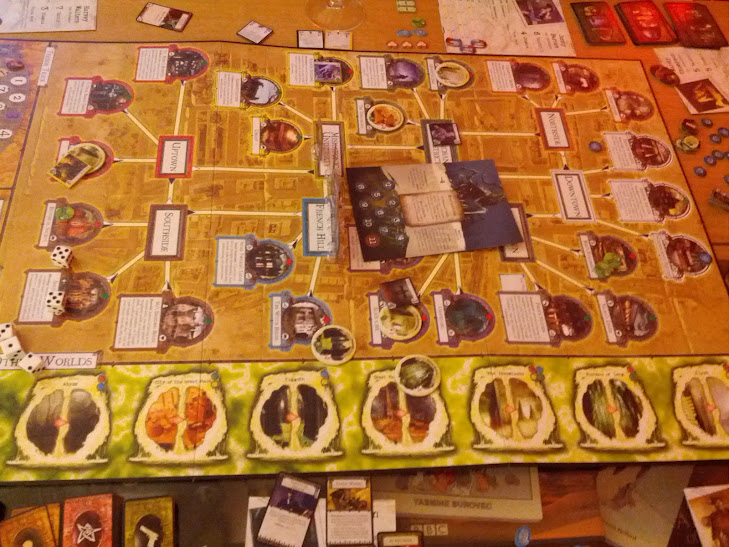 I’m going to begin by confessing that despite calling myself a fan of his work I’ve read very little Lovecraft, I’m in the process of rectifying this at the moment, but to be honest I don’t think that reading the entire back catalogue of an author should be a prerequisite to play a board game. I’m glad to say then when is comes to Arkham Horror by Fantasy Flight Games no knowledge of H.P. Lovecraft‘s mythos is required.

The game is set in the city of Arkham, and all the players need to know is that some weird stuff has been happening and that they need to stop an ancient horror from coming into this world. Sure you can rationalize this better if you’ve read some Lovecraft, or played the Call of Cthulhu RPG but the nice thing is that the premise is so familiar to us from other forms of pop culture that players who haven’t even heard of Cthulhu can quite happily play the game.

To say that Arkham Horror is a gateway drug pen and paper roleplaying is an understatement, each player is handed a character at random (you can pick if you want to but it’s more fun if you randomize it) the characters have a 6 paired attributes, speed and sneak, will and fight, and lore and luck. You also have a number of stamina and sanity points which represent how healthy or sane your character is and a number of item cards.

The linked attributes take the form of a sliding scale which you can change on a turn by turn basis by an amount equal to your “Focus” statistic, this allows you to adapt your character to developments in the game, however some characters are just better at some things than others.

The characters have a nice blurb on the back of the card which tells you why they are in Arkham and how they noticed that something wasn’t quite right about the city as well as a drawing that shows you what the character looks like, each character also has a unique ability which reflects their occupation. The blurb and the picture really help you associate with the character, and if you are that way inclined can help you get into character.

As play progresses you move about the city fighting monsters, trying to close gates to other dimensions and gathering equipment to help you along the way. There are several win conditions which mean that you have managed to make the city safe for the time being, but the fun begins if you don’t manage to win the game before one of the lose conditions happens.

The reason you are trying to fight the endless tide of monsters is that if too many monsters enter play, too many gates to the other world open or you’ve been playing for too long the “Ancient One” is summoned and you have to collectively fight it to save yourselves and the human race.

These fights can range from the relatively easy (We found Nyarlothoptep to be quite easy for example but we did have one blessed character with a shotgun) to the “Everybody just dies” (If you Azathoth awakens then it’s just game over).

Where you reset any spells you’ve cast or items you’ve used, gain money from retainers or preform other actions like healing if you have the doctor or psychiatrist character.

Where you move about the city to different locations, try to sneak past monsters or fight them.

Depending on where you are on the board you can either draw a card that gives you a random encounter for that location, or for some locations you can perform certain actions like buying stuff from the various shops, healing at the hospital, regaining sanity at the asylum or if there is a gate open on the location you are on sucked into another world and have to spend the next couple of turns progressing through it dealing with other worldly encounters before you eventually make your way out and are given the opportunity to close and or seal the gate.

The Mythos Phase will be familiar to anyone who has played The Battlestar Galactica or Game of Thrones Board Games, it’s the random bad stuff happens at the end of the turn phase. You draw a Mythos card which opens a specifies where a gateway to another world opens up and will usually have some rule that affects gameplay on the board, these can be one off events, or persistent changes to gameplay, and help to spice things up. When a gate is opened one or two monsters spill out depending on how many players you have. The Mythos card will also have set of symbols on either a black or white background, these symbols tell you which, if any, monsters move that turn and which direction they move in.

On a whole this game is very pretty, there are a bucket load of tokens and the like fro keeping track of your health, sanity, money, clues, etc. There is also an ungodly number of cards for the various encounters, and Mythos events, as well as the possessions which come in a number of types:

All the cards have nice illustrations and seem to be made from the same card stock as Fantasy Flight’s other board games.

The board is nice and big but it’s got a weird 6 fold design and doesn’t seem to rest flat, mine actually split across one of the seams and is now in two pieces which is a little irritating as I’m really careful with my board games.

One thing you need when playing this game is a lot of space, my coffee table is by no means small but it barely manages to accommodate this game, which is annoying because I quite fancy getting the expansion box sets but I don’t think I have anywhere to put them.

The game is fun to play, it’s billed as a cooperative game and to be honest that is where it kind of falls a little flat, while you can swap items between players (If they are in the same location) you can’t team up against really difficult monsters which is a shame, and it often feels like you are wondering about the board completely independently. Sure the players work together closing gates and it’s possible that one player can clear the path for another player to get to an area that is blocked by big monsters, but it still doesn’t feel very cooperative.

I’m not sure what game mechanics would help make the game more cooperative aside from allowing players to assist each other in actions and maybe having special events that only happened if there were a certain number of players in a location.

The skill check and combat mechanics are fairly straightforward, you, although it can seem that if you have certain characters that there is no point in going into combat because you will just lose or go insane. This can be mitigated by getting skills, spells and items which I assume is the intention, but getting any of these usually requires money, which is a scarce resource in the game. In one game I ended up spending 3 consecutive turns at the newspaper trying to get a retainer to make enough money to buy items meanwhile the number of gates and monsters on the board kept creeping upwards and eventually one of the stores shut before I could get to it with my money (As the “Terror Track” goes up different shop close and more and more allies leave town).

The game also suffers from there being a very thin margin between everything being okay and all hell breaking loose. We’ve played 2 games in which the great old one should have been summoned but we didn’t notice because everything was hunky dory 2 turns ago. A track or dial to keep track of the number of monsters/gates on the board would have been useful as it can be hard to tell at a glance. I’ve seen such tracks made by players but it really is an oversight for them to not be part of the game.

One of the really nice things about this game is that it doesn’t require you to be a hard core Lovecraft fan to really enjoy it, this is an issue I’ve found with players playing Battlestar Galactica for example where a lot of things only make sense in the context of the TV series, and some cards have pseudo spoilers on them, thankfully Arkham Horror is more “Down to Earth” and it’s easier to relate to.

If you are looking for a board game to kill 3-5 hours I highly recommend this game.