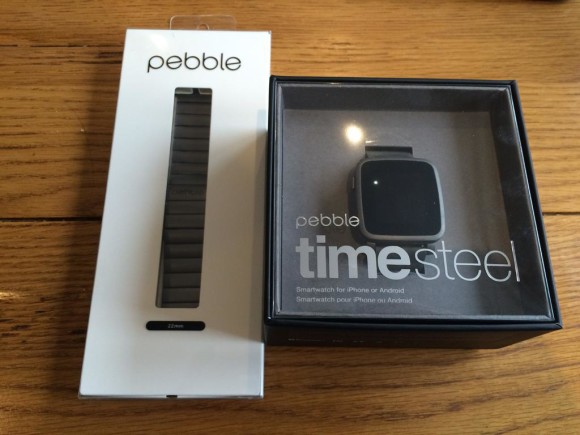 I don’t think you can write a review of a device like a smart watch or smart phone until you’ve had a little time to use it. So although I got my Pebble Time over a month I’ve not wanted to write a review of it until I’ve had a chance to put it through it’s paces.

I personally don’t like the look of the regular pebble, it looks too plasticky, so I was disappointed when the Pebble Time was announced that there wasn’t a Pebble Steel analogue, of course it didn’t take long for Pebble to announce the Pebble Time Steel.

The watch may not be to everyone’s taste, but personally I like it, it looks like a watch, and for the most part it doesn’t have the “Oooh is that a smartwatch” aesthetic that the Apple Watch and the regular Pebble have.

As a Kickstarter backer I got the leather and the stainless steel strap, I’ve tried both and although the leather strap is really comfortable, I didn’t find the steel strap to be very comfortable, it’s possible that I removed one too many links when I was resizing the strap, but it just didn’t feel as nice.

That brings me to my first qualm about the stainless steel strap, although it’s easy enough to get the leather strap off I found it quite difficult to get the stainless steel strap onto and off the watch. Also although the number of links on the steel strap was rather generous, you needed a tiny screwdriver to remove the links to shorten the strap, and it would have been nice to have a small screwdriver in the packaging.

The buttons on the watch have a nice feel to them, although I get the feeling that the watch was designed with only right handed people in mind. Although I am right handed I’ve always worn my watch on my right hand rather than my left hand, and the buttons didn’t feel like they were in the right place to use on one’s right hand.

I’ve taken to wearing the watch on my left hand, which is going against 35 years of habit, and for the most part it’s been okay.

There are a total of four buttons on the Time Steel, one on the left which functions as a back button in most cases and three on the right which normally function as up, down, and select buttons. It’s a paradigm that works quite well and it’s relatively intuitive.

The big new feature of the Time series is the colour e-ink screen, this is the first consumer device I’ve seen with a colour e-ink screen and to be honest I’m quite impressed. The refresh rate is good enough for animation, and the display is probably on par with a GameBoy Advance. You can play games on this, and the refresh is not noticeable, I don’t know how many colours the screen supports, or what the refresh rate is but for a wee screen on my wrist it’s more that good enough.

This is is my first smart watch, so I had not idea what to expect from the UI, I new that pebble had added something called Timeline to the OS but I had no idea how to access it. I found navigating the UI to be relatively straightforward though, it helps that the afore mentioned buttons almost always do the same thing, the once caveat to this being one app where going back required a long press on the back button rather than just a press, so I didn’t think to use the button for anything other than back.

The menu is just a list of options and apps, which you install from the phone app, and selecting an app and using it is fairly straightforward.

It took me two days to discover that clicking up or down opened my “Timeline” though, I probably could have read a manual, or watched a video on using the pebble, but I didn’t so I didn’t know this.

The core functionality of the Pebble Time is as a watch, and as a notification system for your phone, it does both of these tasks quite well. This is not a fitness watch, although there are some apps that have some fitness functionality, it’s not what the watch is designed to do.

That said, how useful that watch is depends on your phone, basic functionality like showing you notifications and your timeline works fine regardless of whether you have and iPhone or an Android phone, however, I found that the ways to respond to a notification on Android were much richer than on iPhone, where you could just dismiss the notification.

I was actually quite impressed with the fact that I could dictate a text message to my phone in response to one I had just received, and confirm the message on my watch before sending it. You can’t do this on an iOS device, I dont’ blame Pebble, I blame Apple for not opening up the API for this though…

One thing that the Pebble Time does, that I doubt either Android Wear or Apple Watch can do though is the ability to pair the watch with two devices, with two different operating systems at the same time. The use case for this is probably quite narrow, but if you have an Android phone for work and an iPhone as your personal device then it can be a godsend.

When I tried it I managed to pair an LG Leon and an iPhone 5S to my Pebble Time, and the Leon used regular Bluetooth while the iPhone used low energy Bluetooth. I did have to manage the watch from the Leon, as for some reason I couldn’t manage it from the iPhone, but that wasn’t the end of the world.

The battery life on the Pebble time is nothing short of amazing, although I never got the reported 10 days, I usually got at least 5 days use out of the watch, and I lived safe in the knowledge that ever if I woke up to a 10% battery warning that I could probably get most of a day, if not a whole days, usage out of the watch. Compare this to my other half who have to charge her Apple Watch every night and for some people that is enough to justify the Pebble.

There was one day where I left an app (Pixel Miner if you must know) open and it drained the battery in a day and a half. That being said, when the battery died I discovered that the Pebble Time goes into a super low power setting that just tells you the time, this lasted for a day and half so if your smart watch runs out of juice you can still use it as a watch for quite some time before you have to find a charge cable.

The Pebble Time has the advantage that it’s backwards compatible with all the old Pebble watch faces and apps, so it already has a vast library thats waiting to be used, a lot of which is in black and white though so you don’t get to make as much use of the lovely screen, although there is a growing number of really nice apps, some of them have more polish than others.

There also doesn’t seem to be as much of a drive for corporations to publish apps for the Pebble, it’s mainly Silicon Valley companies where an engineer has blatantly thrown together the app in his spare time. For exaple I have apps for Swam and Yelp but not for British Airways which would be useful.

The selection of watch faces is vast, many of them actually require explanation on how to read them though…

I currently have Nyan Can on my wrist, and it animates when the light comes on, although I can’t change the date format from US format which is annoying. 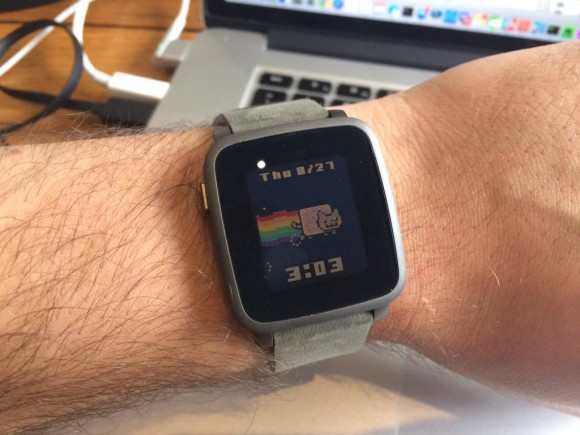 There are also a number of games available if playing games on your wrist is a thing you want to do, including a version of Flappy Bird which is actually not terrible, and a fake Pokemon game.

It’s also really easy to write your own watch faces, within 20 to 30 minutes of loading up the developer kit I had written my own watch face that told the time and a little message which is quite cool: 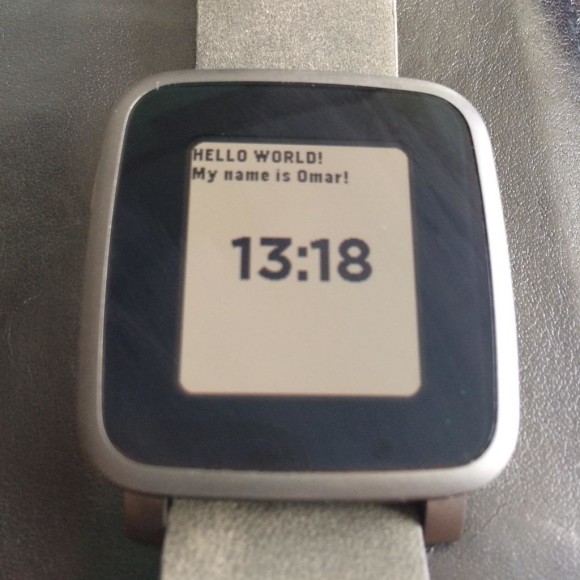 Overall I’m quite happy with the Pebble Time Steel, it lacks in some of the features that the Apple watch has, so I can’t send my heart beat or drawings of penises to my friends who also happen to have the same watch (Apparently this is what people with Apple watches do…) but it tells me the time, and allows me to keep my phone in my pocket and just check my wrist for notifications. Also the battery lasts for ages, so I don’t need to worry about it running out of juice at the end of the day.

While a smart watch is never a must have device, it is a nice to have, and I’ve found that for the most part the watch has helped to curb my bad habit of receiving a notification on my phone and accidentally opening Reddit, Twitter, Facebook, Tumblr or any of the other millions of distractions on my phone. I can glance at my watch, decide whether or not I need to do anything and just go on with whatever I was doing which is really liberating.

I think I’d like the watch more if I had and used an Android phone more often, because the options for interaction with your phone on iOS seem hamstrung, which is a real shame.

If you have any questions feel free to ask them in the comment, I’m willing to try messing about with the watch to answer most questions.